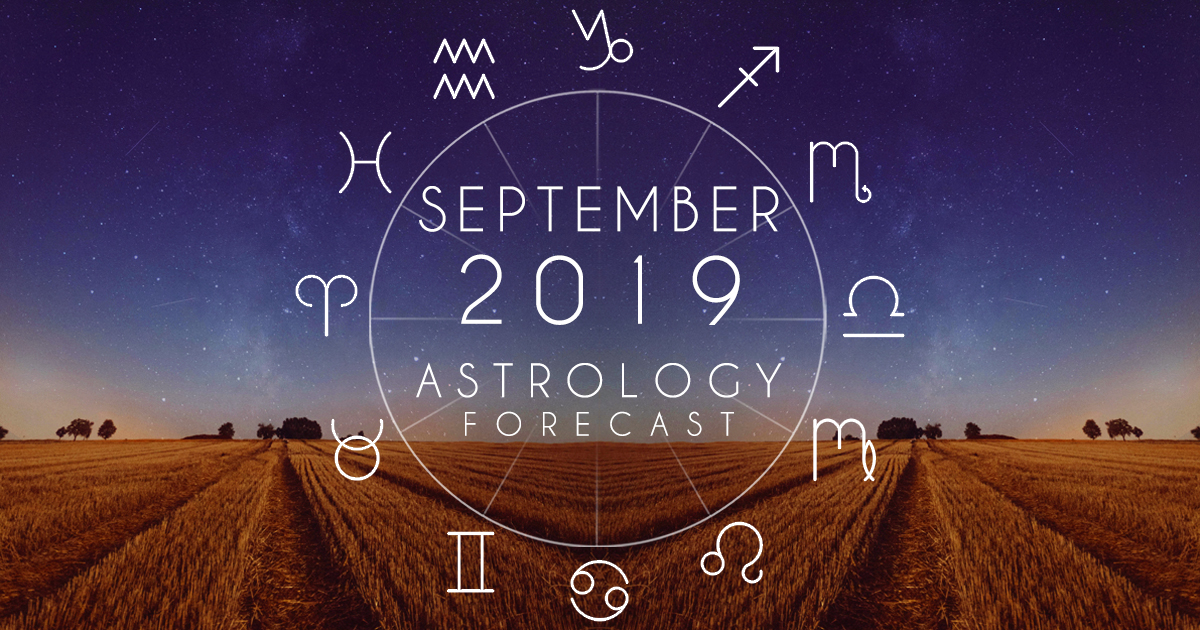 A September Month of Surprising Realizations and Transformation

Posted on August 31, 2019 in Overviews |
By Henry Seltzer for ASTROGRAPH Horoscopes

The Astrology of September features a powerful Virgo stellium that is brought forward in a big way in the timing of the New Moon that proceeds the month, just two days before September begins. The first weekend of the month, therefore, has loads of this Virgo energy of discrimination and coming to clarity about purity of intention, and, depending on where this lights up your natal chart, will bring you the feeling of being almost brand new. The universe is nudging you in certain directions that are in accord with what might be termed “angel guidance” or the deeper purpose that is going on for you beneath the surface layers of your personality, the intentions of your Higher Self. This is not to replace your current approaches but rather to enhance certain aspects of existing habit patterns while inhibiting others. The Trickster energy of Uranus is also greatly triggered in this September timing, being exactly trined by the Sun and the Moon at the August 30th New Moon, and by Mercury as September actually begins. Uranus brings surprises, and surprising realizations, to certain areas of your life, depending on how his position at 6º Taurus lands in your natal chart or what natal house he rules. Uranus is The Awakener, and may well dish up his cosmically ordained purpose in your life as you move through an exciting and changeful month of September, but only if you are ready to stay open to possibilities and to drop those aspects of your day-today behavior that no longer serve you.

All the outer planets are again quite potently featured in the current astrological indications, including Pluto, presaging that ongoing personal transformation is once again our theme song. This includes Uranus, and numinous Neptune, thus creating a decidedly spiritual flavoring to this month’s energies. Uranus is trined by the Sun and Moon at the Virgo New Moon, as mentioned above, and also strongly aspected by the Sun in the timing of the Pisces Full Moon, which takes place late in the evening of September 13th, and conjuncts Neptune. In this Full Moon as well, Mars at 17º of Virgo closely opposes Neptune, within minutes of a degree, increasing his emphasis. We may be subject at this time to illusion and confusion, also to idealization and spiritualization. We are drawn to the compassionate understanding that, as opposed to the polarities called out in the press, we are, in reality, all one. As the Tao Te Ching states (in the words of Witter Bynner):

One who knows his lot to be the lot of all men
Is a safe man to guide them.
One who recognizes all men as members of his own body
Is a sound man to guard them.

As with recent months, the transformative energies of Pluto are once again greatly emphasized during September. Jupiter, Saturn, and Pluto are parallel to each other, each within a tenth of a degree, while the Sun in the timing of the Pisces Full Moon also aspects Pluto. Society, we all will concede, is at the crossroads. This close collision of the two social planets with Pluto presents a preview, perhaps, of what will happen in late 2020, when all three are conjunct, in and around 23 Capricorn, by mid-November. This is right after the U.S. election, presaging the peak period of societal breakdown and possible breakthrough and we shall see what results. In our individual lives as well, this will be a climactic moment of massive structural transformation. We will get a taste of that, in potential preparation, as this month of September continues to unfold.

Newly named planets are also active in these September skies, with Eris, Feminine Warrior energy is support of soul intention, directly opposite the Earth Goddess energy of Haumea, representing earth issues and profound connection with, and awareness of, Nature herself. Late in the signs of Aries and Libra, these new potent archetypal energies form a T-square to Pluto that lasts through the first half of 2020. It is demonstrably true that the man-made effects on climate change are very much in the news these days, a phenomenon that is quite likely to increase over the next twelve months as the evolution of society in this regard continues to expand.

Amidst all this furor, the prominent position of Eris, in square alignment with Pluto, remains, and the message of Eris is clear. It is time, and past time, for each one of us to stand up and be counted, to speak and act from the standpoint of our deepest belief. This constitutes, for each individual, that which you cannot not do. In this way, whatever the outcome, you retain your potency. It is the power of the sincerity of your individual stance, and that power is considerable.