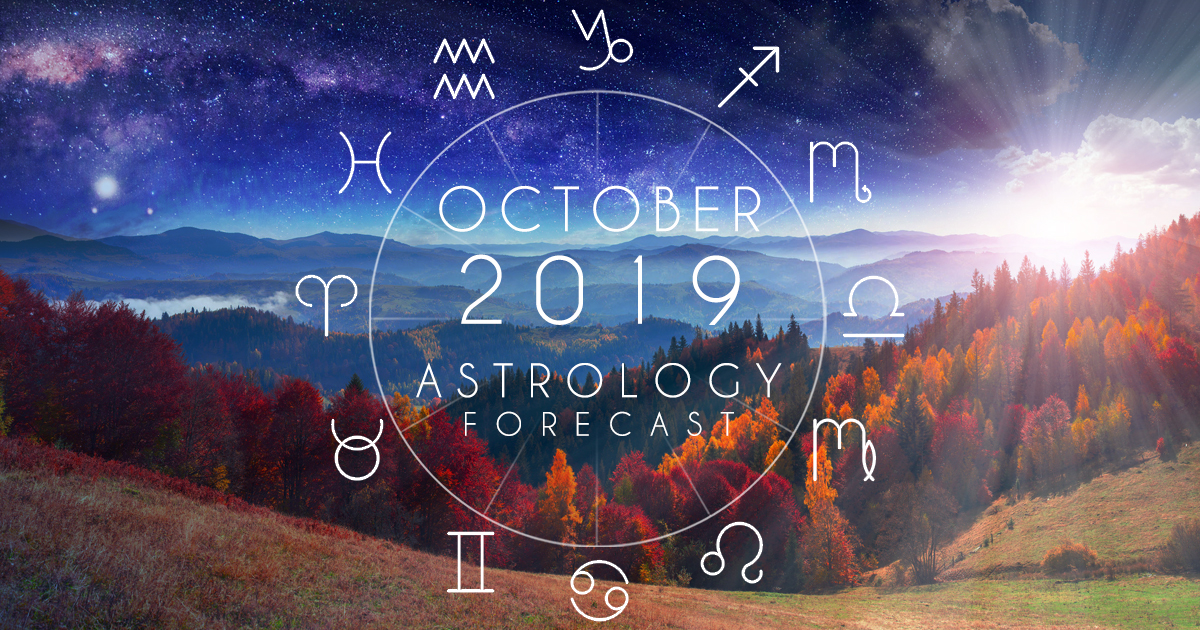 An October Month of Vision, Chaos, and Transformational Change

Posted on September 30, 2019 in Overviews |
By Henry Seltzer for ASTROGRAPH Horoscopes

The Astrology for October features Uranus, Chiron, Saturn and Pluto, based on the recent Libra New Moon from September 28th that colors the entire thirty-day lunation cycle taking up most of the month, and also on the very powerful Aries Full Moon at 20 +degrees that made a T-square to a slow-moving Pluto in the same degree of Capricorn. We find as well that Saturn remains closely parallel to Pluto, as he has all this year, greatly enhancing Pluto’s presence as transformative agent of evolutionary change. The long square alignment between Uranus and Pluto, though fading, remains within the orb established by astrologer Richard Tarnas, indicating that this revisiting of the volatile 1960s that we have seen over this decade of the “tumultuous teens” will not be over until sometime next year. What we have going from the very beginning of the month because powerfully aspected by the recent New Moon, is this strong presence of Trickster Uranus, which is disruptive, changeable, and associated with unexpected events. Uranus is sometimes called “the Awakener” due to his predilection for exposing hidden factors to the light of conscious awareness. Uranus gives us the vision to be able to see as necessary the extreme changes that are being brought about by the transformational action of Pluto. The best description of this characteristic activity of the astrological Uranus that I know comes from Grateful Dead lyricist Robert Hunter, who passed just a week ago as of this writing. Himself with a powerful Uranian presence, he wrote: “Once in a while you can get shown the light/ In the strangest of places if you look at it right.”

Another strong factor in this month’s astrology is also based upon the Libra New Moon and it’s ruler, Venus, which also rules the sign of Taurus, where we find disruptive Uranus. In the timing of the New Moon, Venus lies in perfect sextile to Jupiter, strongly placed in his own sign of Sagittarius, indicating a fundamental optimism that can prevail, in spite of everything. These are indeed difficult times, as indicated by the fading Uranus-Pluto square, and the intenseSaturn connection to the death and rebirth experience symbolized by potent Pluto. Before the new birth, there is relative chaos, as society’s rules of the road become unclear and institutions break down. A wise philosopher stated that in the face of this, we must be patient; “do not dwell on the chaos,” he declared, “but await the birth.”

The Full Moon of Sunday, October 13th, taking place in the afternoon hours at the 20-degree mark of Aries with the Sun in the same degree of Libra, makes a lovely and precise T-square to difficult Pluto, also at 20 + of Capricorn, just having stationed to direct motion and therefore more powerful. This is one peak of the transformational month of October that we have going. The Full Moon in Aries is also in partile or same-degree trine with Jupiter, residing at 20 + of Sagittarius, and is conjunct within a few degrees to the Feminine Warrior energy of the new planet, Eris, located beyond Pluto in the Kuiper Belt, and shown to be quite potent in her own right. Eris thus bolsters the action of Pluto, both in the present month and leading up to the Jupiter-Saturn-Pluto triple conjunction of mid-November, 2020. The message of Eris is that it is vitally important that each one of us take a stand for what we deeply believe in. When we articulate our most sincere values, independent of consensus thought, and take actions based solely upon that, we are no longer any sort of victim, but instead immensely powerful by the self-standard that we set. A current example is Greta Thunberg, the intense 16-year old from Sweden who has electrified the climate change conversation with her strong words, demanding change. She is one who is of course a perfect exemplar of strong Eris by her actions, and, born on Jan. 3, 2003, in fact posses a close grand trine in Fire between Eris, Pluto, and Jupiter. She is an action-oriented New Moon baby, with Eris also square her Capricorn Sun and Moon.


In difficult times like these we must all be asking ourselves, what in fact can we do? Studying and emulating the action of Eris is one answer. Another is to stay patient and trust in the Universe to get things to come out fine in the end. This does not happen, however, without the concerted efforts of each one of us, acting out to the best of our ability to move the needle in the direction of positive change. So there is our dilemma, and our challenge, that we try to get it right, and in so doing, that we rise to the occasion that we are called to, to the very best ability that we can muster.