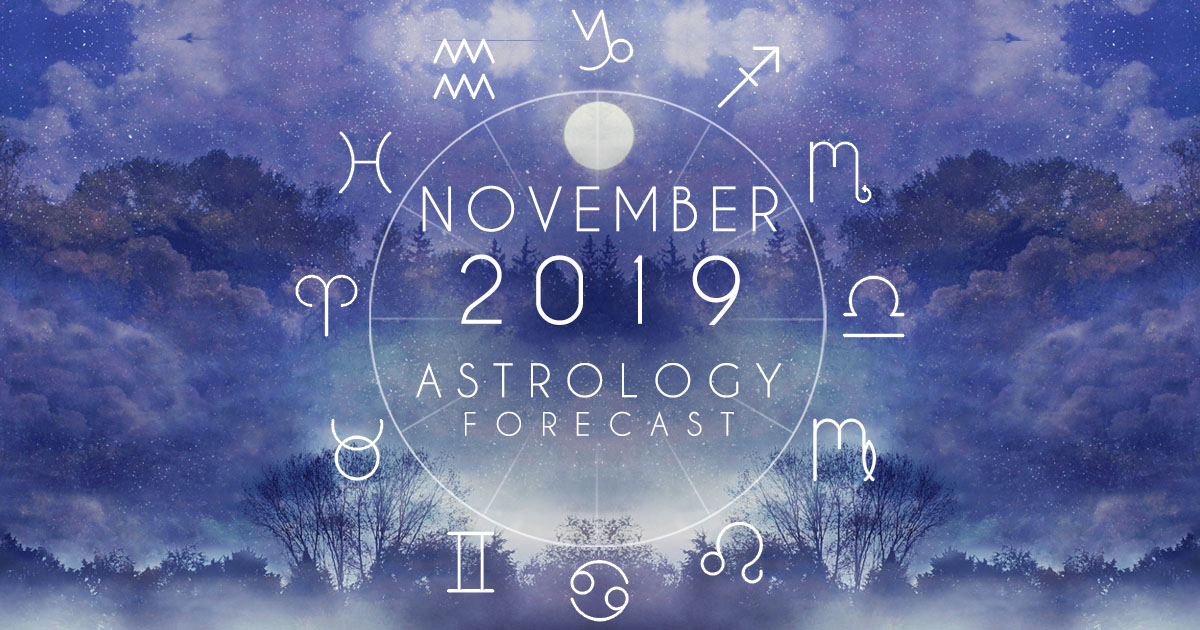 A November Month of Surprises, Re-evaluations, and Alterations

Posted on October 30, 2019 in Overviews |
By Henry Seltzer for ASTROGRAPH Horoscopes

The Astrology of November features Saturn, Uranus, Pluto, and Eris, based on the recent Scorpio New Moon from October 27th that started off the astrological month of November, indicating another time of profound change and unexpected enlightenment. Uranus is directly opposed by the Sun and Moon in this potent lunation, while Saturn is aspected by every personal planet plus Jupiter, Neptune, and Pluto, including stationing Mercury in close parallel. Additionally for November, Mercury is retrograde for almost all of the month, especially when you take into account the shadow period that follows Mercury’s turn to direct motion. The Station Direct of Mercury takes place on November 20th, which is one of the peak moments of the retrograde, and then after that date the effects of missed communications, mechanical breakdowns, and general inconclusive outcomes begin to taper off over the next approximately two weeks time of the Retrograde Shadow. What does this mean as we ponder the huge presence of both Uranus and Saturn in this month’s lunation cycle? The information that comes to us from intuitional awareness, as indicated by prominent Uranus in Taurus, makes for a perfect chime to the introspective qualities that we will be equally prone to, according to the symbolism of Mercury in retrograde motion through the opposite sign of Scorpio. This is while the November lunation cycle brings added focus to this important and inner-oriented area of the Zodiac. The fact of stern taskmaster Saturn being quite prominent as well in the Scorpio New Moon that began the month implies that this retrograde period will be far more intense in its disruptive effects than usual, and that also, when we are able to tune in and profit from them, the lessons of this period will be momentous of content and long-lasting.

Also, because Pluto is so closely configured with Saturn in the recent New Moon, there is a powerful transformational element available to you this month as well, as has been the case in all these recent months, and as the Uranus-Pluto theme of this decade comes to a culmination in the triple conjunction of Jupiter, Saturn, and Pluto one year from now, in November, 2020. Society is reaching an incredible turning point, and in each of our individual lives as well we are feeling the impulse pushing us toward evolutionary change. This is not easy, and it is tempting to escape into other, less fraught, pursuits, but as seminal astrologer Alan Oken says, personal evolution is “the only game in town,” or at least the only game worth playing. We are also witnessing in the evolution of our Western society, the polarities of conservative and progressive elements, symbolized by strong Saturn, and strong Uranus, fighting it out and hopefully eventually reaching for compromise.

There is also a renewed emphasis on The Wounded Healer archetype during November, because Chiron, now at nearly the very beginning of Aries, is aspected by the recent New Moon, and also aspected by the planet Venus, emblem of artistic and lovely relationship orientation, just as Venus enters Sagittarius at the very beginning of November. Amidst all this change and potential tearing down of the structures of society that we hold dear, there is of course a feeling of angst and accelerated future shock. If we let it, this can become sublimated and rise up in triggered reactivity, affecting negatively all our relationships. The secret of course is to simply breath, take ten, and to recognize that everything in the universe happens for a reason, and that this one might be our continuing developmental growth and personal evolution.

Finally, it is important to note that Eris is also powerfully configured now, being trine Jupiter in the initiating Scorpio New Moon and in square to Pluto, at that juncture and during the remainder of the month. Eris is a Feminine Warrior energy for soul intention, as is sorely needed right now, as we confront the struggle taking place in our society, and within ourselves. When we dig deep to determine our bottom-line values, and proceed from this basis, articulating and acting on what we profoundly believe, and nothing else, we honor what it is that we hold inside. In this way we relieve ourselves from victimhood, and we can hold our heads high. Discovering what it is that we cannot not do, we unveil our calling.