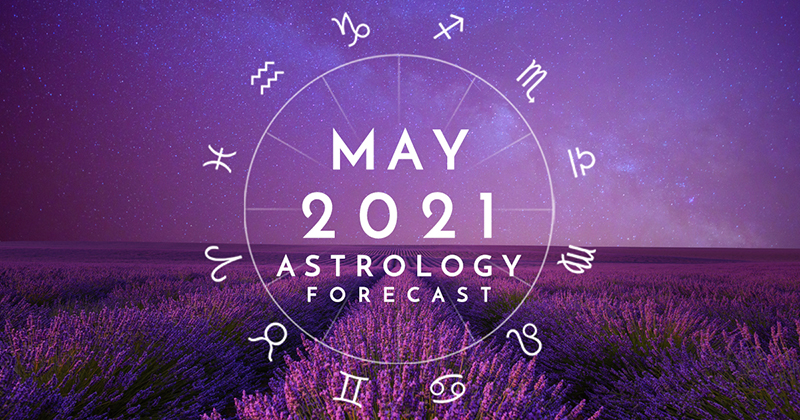 A May Month of Departures and Holding Back

Posted on April 30, 2021 in Overviews |
By Henry Seltzer for ASTROGRAPH Horoscopes

The May astrology is fascinating, coming on the heels of an extremely potent mid-April Aries New Moon that featured Sun, Moon, Eris, and Venus in combination, emphasizing the warrior-like search for creating a better match-up between inner principle and outer deed.

The remainder of this significant lunation cycle plays out over the first ten days of May, when also the Sun is in Taurus, just past his conjunction with Uranus, and squaring a stationating Saturn in Aquarius, highlighting the soon-to-be-forming square between them.

The May month also features in its closing days a lunar eclipse in early Sagittarius and a Mercury Retrograde in late Gemini. This indicates among other things that the following month of June will be rather introspective and thought-provoking, a time period when ideas could shift in practically every area of life.

The square between Saturn and Uranus is active all month, as indicated above, and really takes off after the 23rd, when Saturn is hanging dead still in the sky a mere 1 1/2 degrees away from exact with Uranus. After that, these two outer planets close in on their square alignment for the next month or so, while Mercury is also in retrograde or else just recovering, leading up to the July 4th weekend when hopeful government voices have predicted the ability of the American public to gather safely in celebration of Independence Day; although we will have to see how that shapes up.

The essentials of the Uranus-Saturn alignment in terms of personal evolution comes down to whether and to what extent we can allow ourselves to break out of existing ruts and find a necessary freedom of self-expression that still stays in touch with the inherent limitations of our individual and our societal situation. It is a constant trade-off since an excess of caution makes for one kind of error while slipping out of the traces completely might very well lead to another. The best prescription is to utilize your potent intuition and hope that you make the right choice, or at least the choice that is right for you, and for now.

The May 11th Taurus New Moon also makes a supportive sextile to Neptune in Pisces, while Jupier enters this sign two days later on, implying a shift in the way that we regard the world around us that goes from science to Spirit. There is the fuzzy logic of synchronicity replacing linear thinking, and the accompanying notion that nothing ever happens quite by chance, but somewhere reveals the helping hand of the Universe behind the scenes. When Mercury retrogrades on May 29th, that also will make for a shift in our thinking, a more introspective way of looking at life and love, affecting our relationships as well as our communication and our thought process.

The May 26th lunar eclipse of the last full week of the month is interesting in that the Sun closely trines Makemake, one of the new Nature planets beyond Pluto, associated with environmental activism. There has been quite a lot of talk lately about the existential issue of climate change, and what actions we might be able to take to ameliorate it, and we may expect this to continue.

It is a good idea in the midst of this cultural evolution – in which we remain caught up and either floundering or else possibly surfing the waves to the best of our ability – to remember that transformative Pluto, now retrograde, still represents a powerful factor. We are on the path, ready or not, and like it or not, and we must ride it out. And we each have our part to play, for better or for worse. Hopefully it is a better world that will await us once we get there.