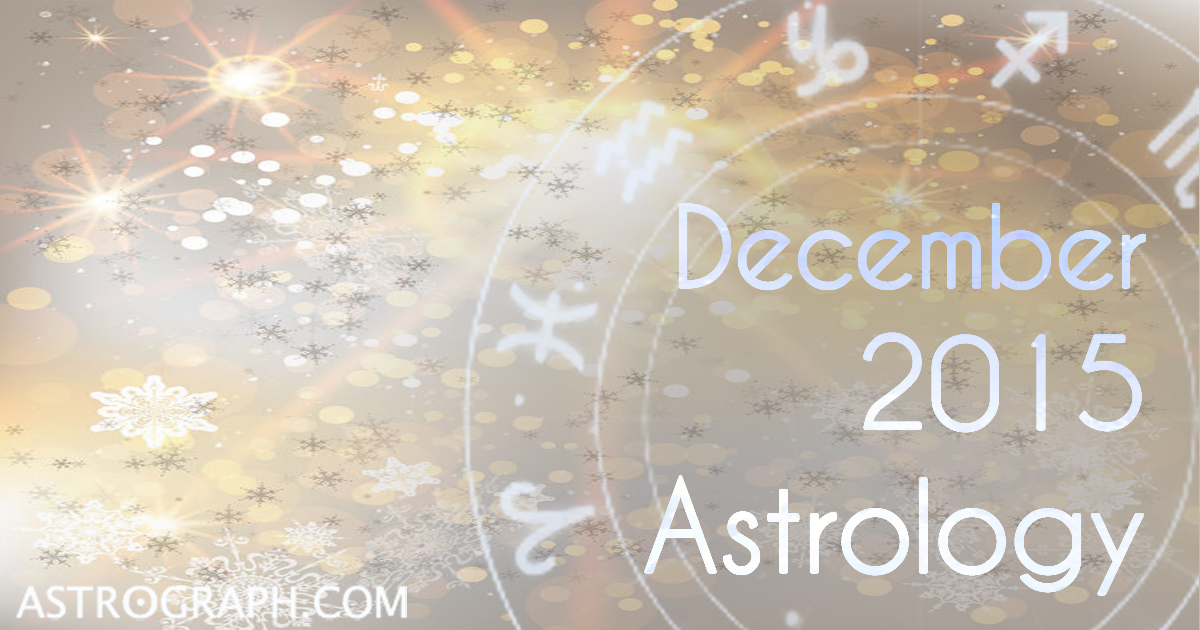 An Action-Oriented and Enlightening December

Posted on December 1, 2015 in Overviews |
By Henry Seltzer for ASTROGRAPH Horoscopes

The astrology of December features Jupiter, Saturn, Neptune, Uranus, Pluto, and Eris. The Full Moon in Gemini that preceded the beginning of December featured Saturn in perfect square with Neptune, a configuration that continues in more subdued form through the ending of the year, returning to exact in the spring of 2016. This collision of essentially antithetical elements will create changes in both, as each responds to the other's archetype. The wild fantasies and escapism that are the specialty of Neptune will have to be toned down somewhat, while the stodgy and unimaginative nature of a conservative viewpoint will be dragged out into the shape-shifting vastness, light, and compassion of Neptune.

New realizations abound. Uranus, featured in last month's astrology also, and thus highlighted throughout the ending of the previous month and the beginning of this one, gets a huge boost in the Friday, December 11th, New Moon, when Mars is exactly opposed, lending added energy, as the New Moon degree makes a constructive aspect as well. With Uranus opposite Mars in the New Moon chart, the possibility of unexpected events, even accidents, is also strong.

Offsetting this, Saturn is coming more firmly into the picture, being aspected by the Last Quarter Moon of Friday, December 18th, and by Mars, in the recent Full Moon, as well as Venus in the timing of the Sagittarius New Moon of December 11th. The conservative viewpoint represented by Saturn should serve to calm things down and damper the native enthusiasm of a stimulated Uranus in Aries. Saturn in his own right signifies the wisdom that arises through bitter experience, difficulties overcome, character constructed. Although transpiring more slowly with Saturn, the outcome is more certain, and the lessons are well learned. Saturnian slowness has its positive side, similar perhaps to how the water in the irrigation ditch needs to slow down, in order to be fully absorbed.

Uranus too has his charms, in the instant epiphany that needs no logical flow to arise, a sense of unique participation and shortcut twists to the perception of the greater truth in any particular matter or occasion. In these late fall skies, Uranus is located near the new planet Eris, the better to exercise these trips along the high road, promoting deep soul intention in support of intuitional leaps of imagination and thinking outside the box. Eris is also directly supported in these powerful December lunation configurations, being closely aspected by Jupiter in the second half of the month, beginning with the December 11th New Moon, and in perfect square to Mercury in the Christmas Day Full Moon of December 25th. This implies that we will be thinking about where we would like to place our energy in the year ahead, in a way that is more directly in alignment with our deepest soul intention.

All this is prelude to the Uranus-Pluto square, returning to less than two degrees by the end of December, and less than one degree by the middle of January, 2016. This is the evolutionarily formative aspect that also signals breakdown of the old structure to make way for the new. For a while there is chaos ? until the dust can settle, perhaps into a new pattern altogether. Uranus is the awakener, while Pluto is the wrecking ball that makes way for the new dwelling that is yet to emerge from the ashes of the old. As they say regarding Pluto's dire changes and the disruption thereby experienced, "do not dwell on the chaos but await the birth."