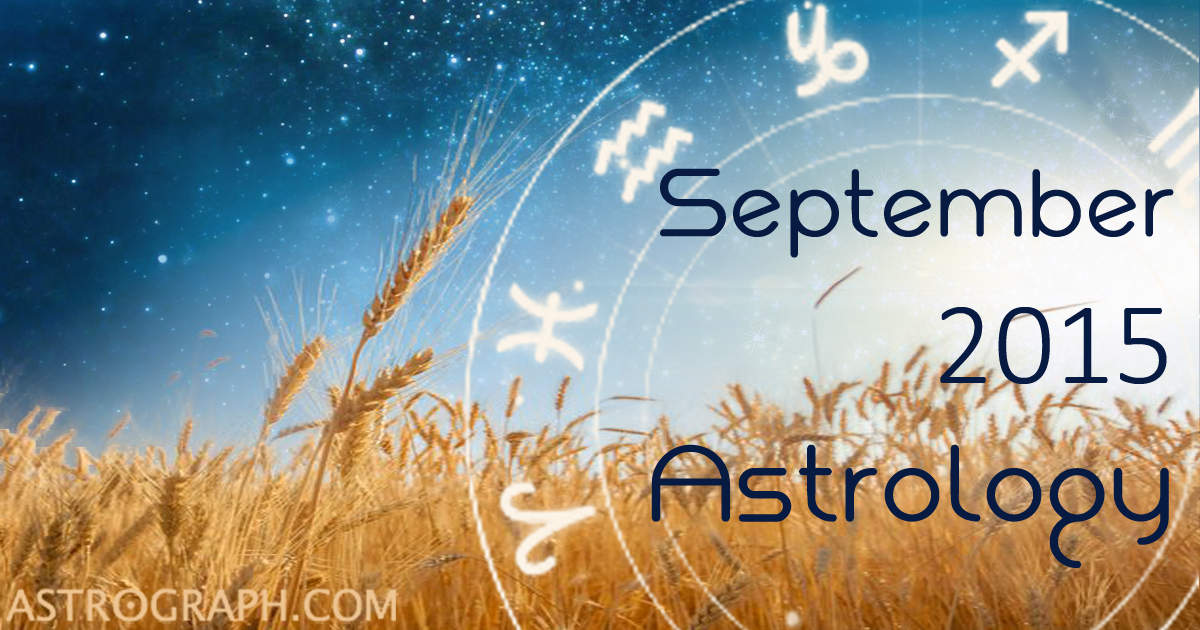 The Inner Explorations and Outer Realizations of September

Posted on September 1, 2015 in Overviews |
By Henry Seltzer for ASTROGRAPH Horoscopes

The astrology of September features Mercury, Venus, Jupiter, Saturn, Uranus, Pluto, Neptune and Chiron. Saturn is emphasized this month as a consequence of his mid-September entrance into Sagittarius, ending the era of Saturn in Scorpio, which has lasted for the previous two and a half years. The mid-Virgo New Moon and Solar Eclipse of September 12th also aspects Saturn in the final degree of Scorpio as he prepares to slide into Sagittarius a few days later. This New Moon opposes Chiron and makes a close inconjunct aspect to Uranus. These two powerful astrological archetypes remain almost exactly thirty degrees apart for the entire month of September.

Neptune is emphasized as well in this month's astrology, in part because triggered, just before the month began, by the Full Moon in Pisces, and in part because the powerful eclipse that kicks off the second half of the month has Jupiter in forming opposition with Neptune. This numinous, idealized, and somewhat confusing archetype is therefore very much with us as we navigate the strange waters of September.

September is rather extreme as far as inner planet retrogrades go, with both Venus and Mercury participating in turn. Relationship-oriented Venus remains in retrograde motion as the month begins, stationing to direct motion on the 6th. This timing implies that, for all of us, relationship and financial issues will have their thoughtful and internalized side for at least the first half of the month. Then, in Libra, ruled by Venus, and equally concerned with issues of relating, Mercury retrogrades on September 17th for the remainder of the month, and on into October. The Mercury Retrograde period will likely exhibit the usual symptoms of missed connections, and of mechanical and communicative breakdown, as well as the opportunity to continue the self-reflective theme of the first half of the month, and this would be especially true with regard to the key relationships in our lives. This second half of September makes for an excellent time to journal regarding where life and love is taking us, this time around.

Chiron, the Wounded Healer, is also highlighted in this month's configurations, and symbolizes early wounding that could arise for healing and renewal in the midst of this crucial time. The strong presence of Chiron in this summer's series of powerful lunations indicates that you might find that reactivity arises, which in the end yields great rewards when examined. In the process, your investigations could lead you downward, into the very depths of your psyche.

September is the gateway to a quite climactic year-end as well, because Pluto stations to direct motion on September 24th. Subsequently, over the remainder of the fall period, Uranus and Pluto begin to draw near each other once again in forming aspect. Although they no longer touch in perfect square formation, in December and January they come to less than two degrees of this dynamic aspect that continues to characterize this decade. Our transformations are still upon us, and they reflect the cultural changes that we encounter in the surrounding collective. We affect as well that larger outcome by our most concerted efforts to take the high road in all out dealings, and to seek to embody our deepest values, most idealized sense of ethics and powerful concept of right relationship, to the extent that we can manage these lofty goals.