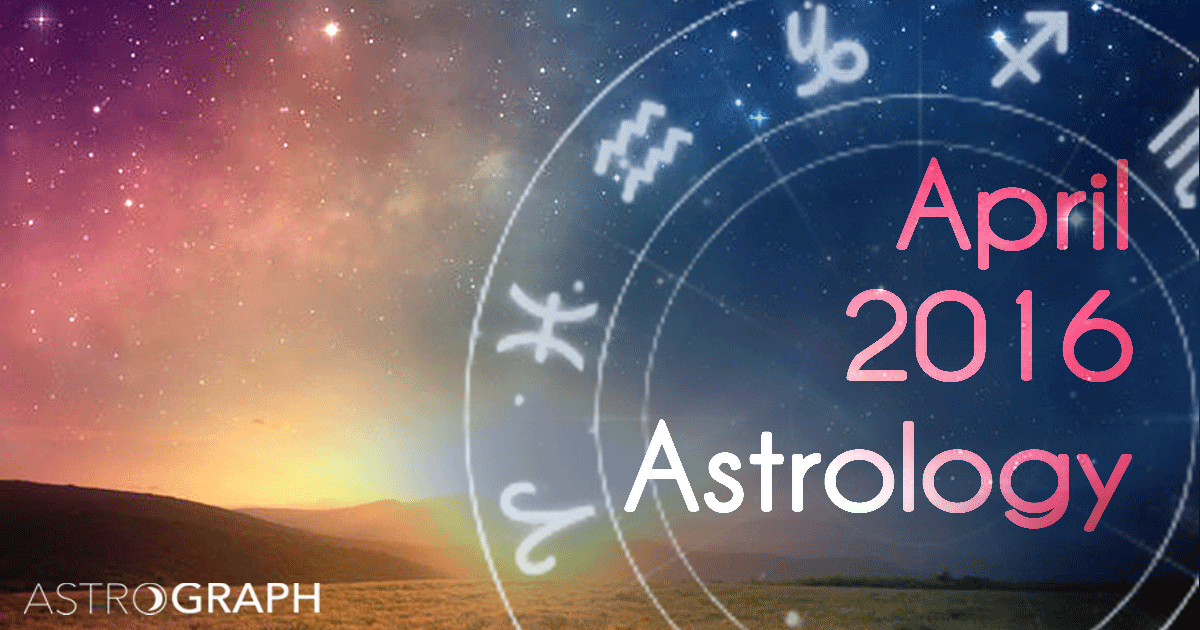 April Astrology – a Pause to Reconnect

Posted on April 1, 2016 in Overviews |
By Henry Seltzer for ASTROGRAPH Horoscopes

The astrology of April features Mars, Saturn, Uranus, Neptune, and Pluto. Coming off the twin eclipses of March, this month's astrology might seem a bit tame by comparison, being in large part about slowing down and taking stock. Those potent configurations of the previous month featured the active presence of the outer planets, most notably Uranus and Pluto, still in their storied square alignment and highlighted by the Jupiter-Saturn square that peripherally aspected them both. In mid-April, both Pluto and Mars turn retrograde, to join in the recent retrograde motion of Saturn, while by month's end we have the second period this year (out of four) of Mercury in its retrograde mode, still in Earth signs. This time it's Taurus. Later this year, Mercury will retrograde in Virgo during September, and in Capricorn from mid-December to January. With Mars, in mid-month, stationing to retrograde motion, and with Saturn also now in retrograde, both in close parallel to a stationing Pluto, April is a month of stop-and-go; mostly stop. Mars symbolizes forward motion, and when in retrograde, and additionally in connection with a relatively stationary Saturn and Pluto, there is loss of forward momentum and a corresponding increase in introspection. We might be inclined to dwell on the past, as well as on the potential to learn from our successes, and even more importantly from our mistakes; and these can be valuable lessons.

That is not the whole story, however. There is also in these April skies a strong presence of Jupiter and Uranus, and these two planets are all about leaving the past behind. The April 7th New Moon conjuncts Uranus, in close conjunction also with the new planet, Eris, which greatly emphasizes his presence. Jupiter is very prominent also, standing alone in the relationship-oriented side of the April 7th New Moon chart. Thus we have, along with the holding back of this period of time, as symbolized by a stationary Saturn, and by Mars retrograde, a strong impulse to get to the next stage of our evolutionary development. And let us not forget, in the midst of strange defeats and ongoing violence, that these are also very sincerely positive times; we can ride that hope represented by strong Jupiter toward a better future for ourselves and for generations to come. In a significant symbolic chime with a move toward internal reflection that this retrograde month implies, Uranus also symbolizes deep intuitional knowledge that comes unbidden when we can half-close our physical eyes to see it.

As far as the Mercury Retrograde period that is just around the corner is concerned, beginning on the 28th of this month, it is interesting to note that Mercury spends nearly ten weeks in Taurus, from early April to June 12th. As related above, this is an especially introspective time, as we also have Mars making a rare retrograde from this month through to June 29th — only re-entering Sagittarius, the sign he now occupies, in early August. We therefore have quite a strong retrograde presence of personal planets for all this springtime, implying that forward momentum is slowed. As astrologer Carolyn Casey is fond of saying, just as the water in the irrigation ditch slows down, in order that it might better be absorbed, so too our understanding of the metamorphosis that we are currently going through will benefit by the dose of self-reflection that this period brings.

Meanwhile the beat for massive change goes on. With Uranus and Pluto both emphasized this month, Uranus by its New Moon placement and Pluto by his station, early on the 18th, and by his close parallel all month long with Saturn, we continue to have the unmistakable presence of major transformation in our personal lives, as is evidenced in the surrounding culture as well, throughout the remaining years of this tuning-point decade, through to 2020.