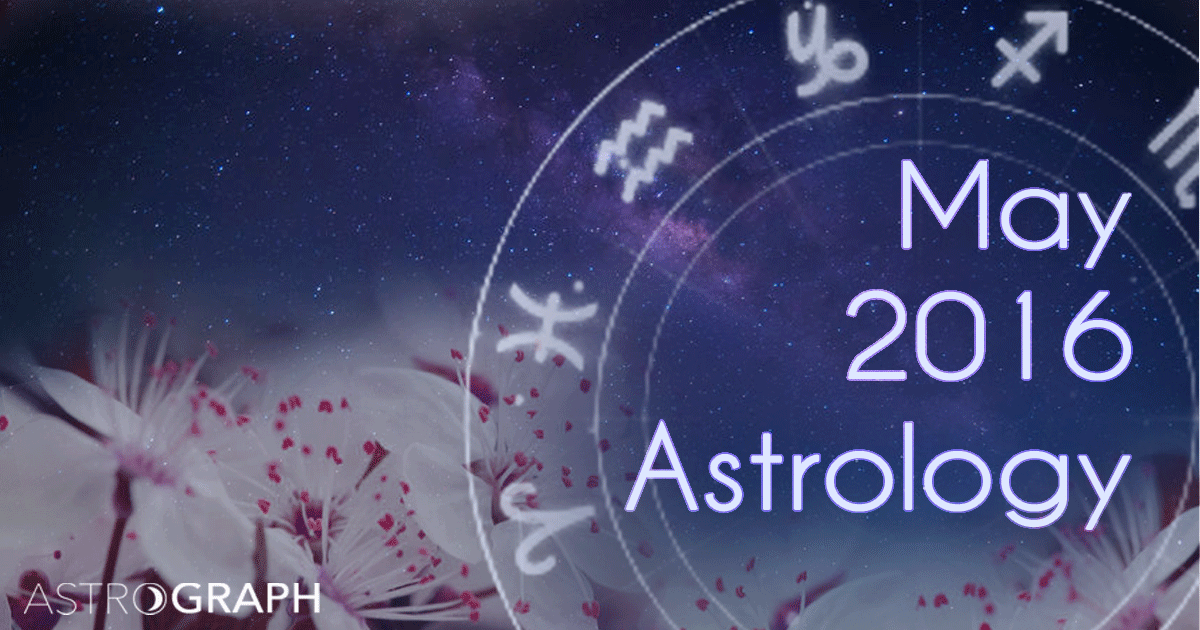 The Astrology of May – a Retrograde Season to Remember

Posted on April 30, 2016 in Overviews |
By Henry Seltzer for ASTROGRAPH Horoscopes

The astrology of May features Mercury, Venus, Mars, Jupiter, Saturn, Uranus, and Pluto. This is a complex month when inner planet retrogrades bring a sense of confusion and potential upset, switching gears, and when all three outer planets are once again very much in evidence, signaling transformation. Mercury is in its retrograde for the entire month, and then some, when you take the period of its retrograde shadow into account. Mercury stations direct on Sunday, May 22nd, one day after a dramatic Full Moon that is closely conjunct retrograde Mars, so that this is one particularly strong weekend of the entire Mercury Retrograde period. Mercury finally escapes its retrograde shadow next month, on June 7th. It is also fascinating to note that when the New Moon comes along, on Friday, May 6th, the Sun and Moon make a grand trine in Earth signs with Jupiter and Pluto, bringing the volatile forming square between Jupiter and Saturn fully into the picture, and Uranus-Pluto as well. This grand trine is formed once again when Mercury stations two weeks later, at 14 degrees of Taurus. Jupiter in mid-Virgo stations this month also, and remains all month in close contra-parallel with Neptune in Pisces, opposite Jupiter. With all the outer planets triggered in this way, what we have is another rather intense monthly cycle, with plenty of introspective moments and with other-dimensional intimations that nudge us into the personal evolution that our higher selves have apparently long ago signed up for.

Venus is the personal planet that pairs with Mars, as in female — male energies, and as exemplified also by the fact that they rule the opposite signs of Libra and Aries, Taurus and Scorpio. For almost the entire month of May, Venus is in Taurus, the sign she rules, and is therefore quite strong, especially at the time of the May 6th Taurus New Moon when she also makes an inconjunct aspect to retrograde Mars, now running backward through the sign of Sagittarius. Venus makes another contact with retrograde Mercury in Taurus, a conjunction, on Friday, May 13th, in the exact timing also of the First Quarter Moon. These interesting combinations with retrograde personal planets signify an emphasis on areas that Venus rules: art, beauty, earth magic, connecting with others around us and especially with important partners. These subjects are therefore on our minds and in our hearts for most of the month, when we will be looking beneath the covers of our artistic and our relationship dynamics for the underlying motivation.

With Jupiter and Saturn coming into the third and final pass of their perfect square alignment, this is also an exciting month for their own contrast in archetypal energies. Jupiter stations to direct motion on May 9th, the same morning when Mercury conjuncts the Sun, marking one peak of the retrograde period. The New Moon of May 6th makes a potent grand trine with Jupiter and Pluto, repeated when Mercury stations direct on the 22nd, so that all through the month this dance of the social planets is very much emphasized. Everyone therefore gets a big hit of applied philosophy now, and of social responsibility, recognizing where they might be able to plug themselves in for the purpose of creating a better system. In the most positive way of seeing this, there is a sense of joy through limitation, as Jupiter enhances the normally depressing character of restrictive Saturn, as well as a sense of healthy grounding imparted to the Jupiter people in the group, those with strong Jupiter in their charts or a Sagittarius emphasis.

Uranus and Pluto remain in square, with no further exact hits, but still only separated by five or six degrees, as they receive an unusual level of emphasis also, throughout the month. Uranus and the new planet, Eris, are close to exactly conjunct, which will perfect next month. Pluto gets a boost as well, from Saturn all month long, and from the New Moon of the 6th, Mercury-Venus on the 13th, and by Mercury's station to direct motion on the 22nd. Because Saturn and Pluto continue in their close parallel aspect, existing structures of society are dying and new ones arising to take their place, which is also happening on an individual level. There is inevitability to the sense of revolutionary progress indicated by these further developments of the Uranus-Pluto square, as this intense and pivotal year of our supremely fractious decade continues to unfold.