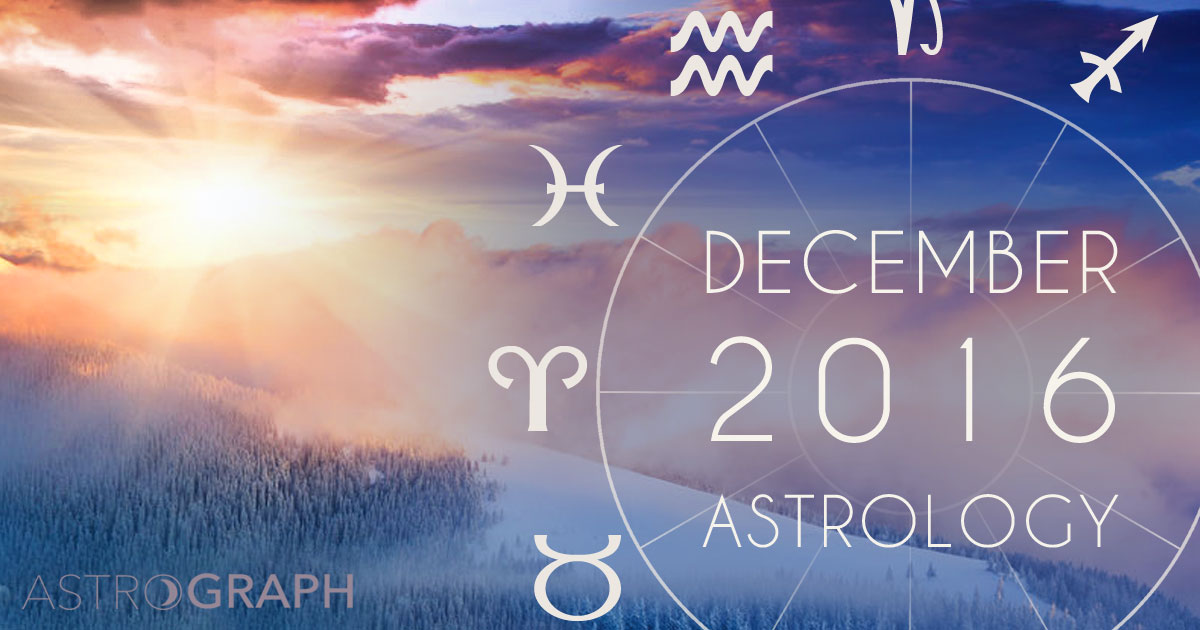 A Mystical and Changeful Month of December

Posted on November 30, 2016 in Overviews |
By Henry Seltzer for ASTROGRAPH Horoscopes

The astrology of December features Mercury, Mars, Jupiter, Saturn, Uranus, Neptune, Pluto, and Eris. All the outer planets are strongly represented in the New Moon and Full Moon configurations, so that, as the month continues to unfold, our awareness is bound to increase regarding the transformational intensity of these times, and our part in fulfilling them in accordance with our own unique destiny.

With powerfully transformational Pluto, and also the numinousity of Neptune, greatly emphasized in the Sagittarius New Moon configuration from the 29th of the previous month, we are struggling to define for ourselves our own position, and as we do so we are taking spiritual values, that which is beyond and actually in support of the physical world, more firmly into account. The massive structural changes of the 21st century are gaining in momentum in this mid-decade timing, and it is difficult to know exactly how to respond. A clue is found however in the strong presence of the new planet beyond Pluto, namely Eris, which represents a spiritual warrior energy for being nothing but ourselves, at all costs. The implication is that if we know who we are at the deepest levels of our being, and are able to act on that knowledge, nothing that comes along in the outer world can disturb this fundamental sense of ourselves.

It is fascinating how both the Sagittarius New Moon and the subsequent Full Moon of Tuesday, December 13th, connect with a highlighted presence of Eris, in close conjunction with trickster Uranus. The New Moon makes a sesquiquadrate aspect with the position of Eris, at 22 Aries, exact to within a few minutes of a degree, while in the Full Moon timing, the Sun and Moon at 22 degrees of their respective signs form close aspects to Eris as well. In the context of Eris’ continued close conjunction with Uranus, this also implies that the surprises that we have seen during the summer and fall are still far from over, and that in being the best representative of ourselves that we can be, a factor of rebellious quirkiness is likely to remain an important factor. It does seem evident that being yourself at all costs almost necessarily comes with embracing your own individual destiny, involving factors that are unique to yourself. It is also true that various forms of rebellion are very much in the air, from Brexit and the ascension of the surprise President-elect, to Standing Rock.

A powerful Mercury Retrograde, beginning on the 19th, adds an element of introspection to the proceedings. We are attempting to come to terms with major change, and our requisite part in that that we simply try to be the very best and most authentic version of ourselves that we can gracefully come to. Then, no matter what might occur on outer levels, we have our answer in terms of what we ourselves uniquely bring, and that in which we most deeply believe.

With the advent of the Winter Solstice, on December 21st, considered an important harbinger for the year ahead, we find Jupiter opposite Uranus and Eris, making a T-square to Pluto in close conjunction with retrograde Mercury. This is an extremely powerful configuration, with the opposition between Jupiter and the Uranus- Eris conjunction lasting all January, including the American presidential inauguration ceremony of January 20th, and right through to the March 15th repetition of their exact alignment. What might we expect, as the rest of this massively transformative decade continues to unfold? Because the aftermath of Uranus square Pluto, exact from 2012 to 2015, still remains with us, we might see something like the fervor of the revolutionary sixties, as everyone is motivated to come forward, in the battle of the 99 percent in principled opposition to the establishment corporatocracy, whether for or against. It seems that everyone must be ready to stand and be counted for that in which they most sincerely believe. For better or for worse, the old Chinese proverb “May you live in interesting times” has certainly come true for us, here in this middle portion of our crucial decade.