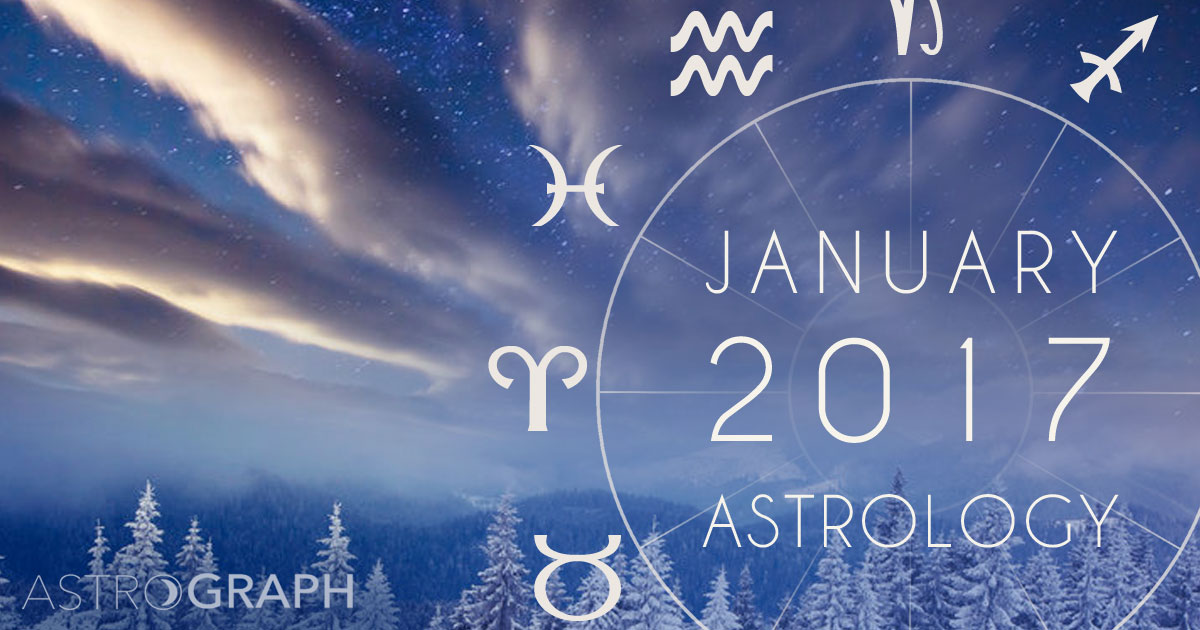 An Enlightening, Inward Turning and Activating Month of January

Posted on December 31, 2016 in Overviews |
By Henry Seltzer for ASTROGRAPH Horoscopes

The astrology of January features Mercury, Mars, Jupiter, Saturn, Uranus, Neptune, Pluto, and Eris. Both retrograde Mercury and Mars in Pisces are strongly placed this month, being aspected by the potent Capricorn New Moon from the last few days of December. Mars being conjunct Neptune in this timing, you can count on it that, for the entire thirty-day cycle of this lunation, lasting to January 27th, there is uncertainty of activity and of outcome. Mercury, also highlighted at the New Moon, remains in retrograde throughout most of the month, when you take the period of its retrograde shadow into account, roughly 2 ½ weeks following the station to direct motion that Mercury makes on January 8th, as it returns to its starting point in mid-Capricorn. We therefore have before us an introspective month of looking more deeply within ourselves for answers that can be found nowhere else. There is quite a lot going on. Jupiter and Uranus are found in a powerful T-square, being closely opposed, with Uranus conjunct Eris, and both in square to Pluto. Saturn is parallel Pluto. The presence of conservative Saturn in the same degree of Sagittarius as Jupiter is in Libra completes the picture, with Saturn almost precisely trine Uranus/ Eris. This is an exciting aspect pattern, indicating that new information abounds, and that everything that comes to light contributes to the ongoing massive transformation, in this decade, of ourselves as individuals and of the society that surrounds us.

Saturn’s participation in this Grand Cross alignment is profound, and is reminiscent of the volatile sixties, when Uranus and Pluto, conjunct in Virgo, were opposed by Saturn during the 1965-66 exact conjunction, and when, during the famously divisive summer of 1968, Saturn stationed in precise quincunx to the position of Uranus in late Virgo. We have before us now a quite similar time, when polarities and fractures in the social structure are very evident, and when what is required of us is that we do our utmost to keep our own heads on straight.

The increase in consciousness that is part and parcel of our response to difficult circumstances is indeed important, which is also the message of prominent Eris, which my research has been able to characterize as Feminine Warrior energy for soul purpose, Eris is part of the powerful month-long T-square described above, and therefore greatly emphasized. Once we know of what our deep intention actually consists, we are empowered to attempt those changes in the social structure and within ourselves that truly support it.

Besides Saturn and Eris, another planetary archetype associated in the Grand Cross alignment is Chiron, the Wounded Healer. In the New Moon that characterizes the month of January, Chiron is located at 21 degrees of Pisces, in close semi-sextile to Uranus/ Eris and in exact square to Saturn. With Chiron so fully participatory in these intense planetary patterns, we might want to ask ourselves what fears are coming up, and how do these tap into feelings of insecurity that we have going as a result of early childhood trauma, which is Chiron’s province. As we proceed through the decision process of this difficult time, we therefore also have another opportunity to move through our wounded places within us, toward a more integrated perspective.

Because transformational Pluto is so greatly emphasized in this first month of the New Year, and also the confusion and uncertainty of outcome represented by Neptune, we have a situation in which the best that we can do is to get clear in our very own minds and hearts on where we ourselves, personally, stand. Once we unequivocally know what we deeply believe, and can articulate that viewpoint, and decide to act on it, than nothing can harm us.

Bernie Sanders, who lost the U. S. presidential nomination over the summer, might prove to be a good example of someone who acts on this principle. Whether or not you agree with his politics, few would argue that he does not know what he wants. You didn’t see him upset or even dismayed by his primary election results, but, rather, you saw him digging in to fight even harder. He therefore exemplifies a battle cry for these fractious times that we are living through from which we can all take heart: when the going gets tough, the tough get going.