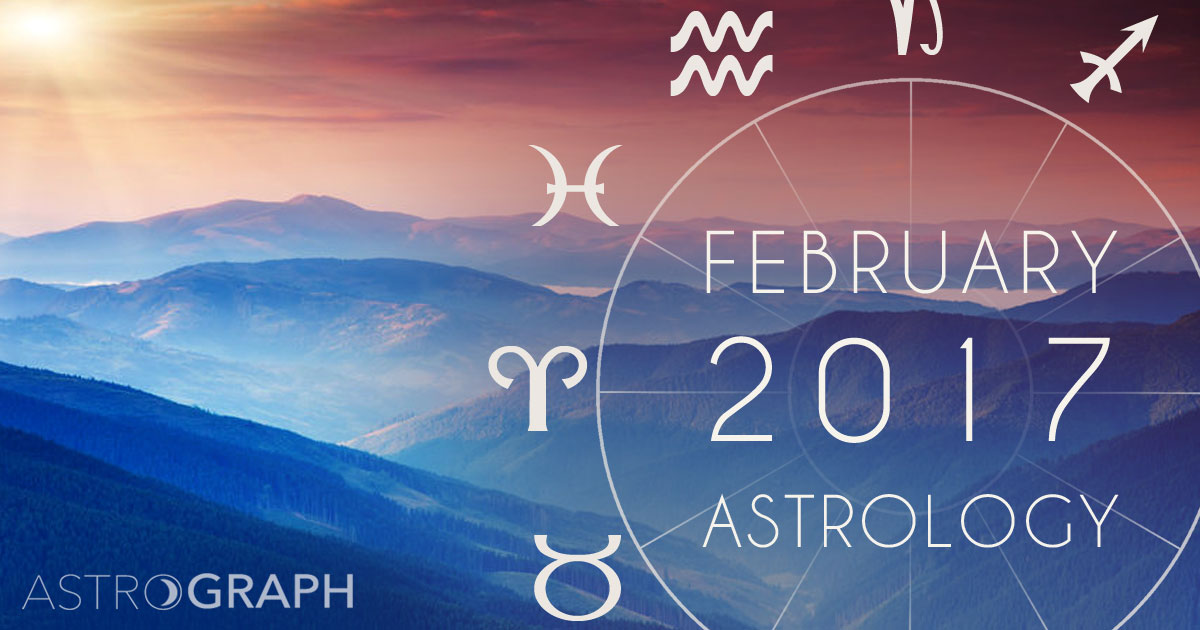 A Dynamic, Surprising, and Insightful Month of February

Posted on January 30, 2017 in Overviews |
By Henry Seltzer for ASTROGRAPH Horoscopes

The astrology of February features Mercury, Mars, Jupiter, Saturn, Uranus, Neptune, Pluto, and Eris, and two eclipses. By now, Mercury has fully recovered from its recent retrograde, as of last January 27th, and as it does so, conjuncts Pluto in mid-Capricorn in the chart of the January 27th New Moon that holds the keys to this month’s astrological cycle. Many of the themes from January, involving outer planet combinations, are true for this month of February as well, and with even greater intensity. Jupiter stations at 23 Libra in the first week of February, late on Sunday evening, and thus maintains his recent and very strong opposition to Uranus and Eris, the new planet beyond Pluto. Uranus and Eris continue to be separated by less than two degrees, increasing the active potency of both archetypes. In particular, with Uranus conjunct Eris, opposed to Jupiter, and also still in square with Pluto, there are loads of brilliant new ideas and insights flooding in, with consequences for individual and collective agendas. Things will not go at all the way that was planned, but what is equally true is that there will be a great deal of learning in the side roads that are unexpectedly taken.

Then too, we have the very powerful Lunar Eclipse in Leo of February 10th, which aspects Eris, by trine and sextile, within 10 minutes of a degree, and therefore also triggers the Jupiter-Uranus opposition, and Uranus square Pluto. The February 26th New Moon at 8 Pisces also makes many powerful outer planet connections, indicating that our massive structural transformation continues into the following month. Of these, the most notable is to numinous Neptune. Everything, it is said, is an illusion here below, which might explain the recent rise of “alternative facts.”

Because Mercury conjuncts Pluto in the chart of the New Moon that initiates the current cycle, having taken place a few days before the start of the month, this implies greater conscious participation, all through February, in the deep-seated and massive changes that are going on for you. Mercury has been in its retrograde cycle until this same day, counting the shadow period, so that a new vista is also opening up for each one of us that takes the lessons of the recent retrograde and begins to apply them to current needs. Mars hovering near the Aries point at the January 27th New Moon further enhances the active nature of this month, and the strength of Uranus in Aries, which he rules. With the revolutionary impact of Uranus square Pluto – the aspect that defines our decade – so thoroughly triggered, nothing escapes being changed; there is a transformational component to everything that is currently taking place. You benefit when you can slow down to meditate, paying an almost literary attention to your own life, as if it was a form of carefully crafted movie.

Chiron is prominent this month as well, being aspected by Venus, Jupiter, Saturn, Uranus, and Eris. Mars is also closely parallel to Chiron, so that this archetype of the Wounded Healer is an important part of what we are dealing with. Indeed some of the actions of the new administration here in the U.S. seem to arise from painful feelings of powerlessness that seek an outlet, and also there are painful consequences to the more extreme positions that are being taken. Individually we can at least deal with our own issues, and by our inner work heal others around us as well.

We live in the strangest of times. And yet we might take solace in the thought that everything happens for a reason. The eventual lessons of the first two months of the year, with its mixture of both positive and negative examples, will ultimately bear fruit. It is already a more conscious 2017 than was generally available during all of the twelve months previous to it.