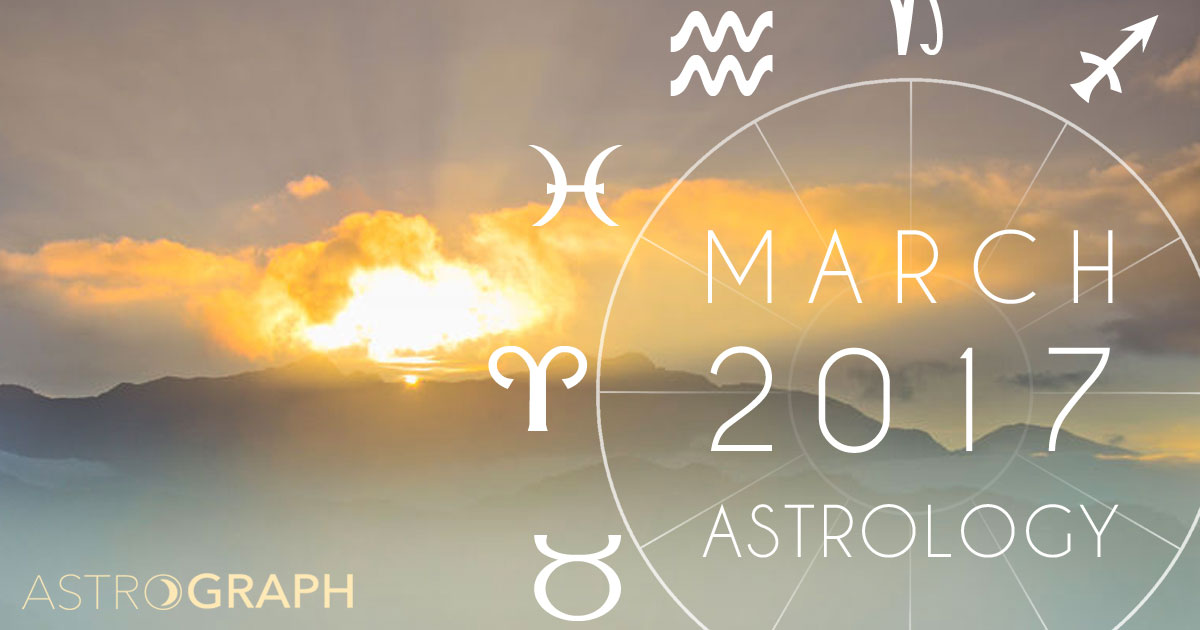 A Dynamic, Surprising, and Transformational Month of March

Posted on February 27, 2017 in Overviews |
By Henry Seltzer for ASTROGRAPH Horoscopes

The astrology of March features Venus, Mars, Jupiter, Saturn, Uranus, Neptune, Pluto, and Eris. All the outer planets are once again invoked, presaging the transformation of life structures and urging us to reach beyond the surface events of our lives for the deeper meaning. The very dynamic New Moon and Solar Eclipse of late February has ignited a lunation cycle for the current month that has plenty of strength of movement. In the midst of a series of powerful monthly cycles, we therefore come upon what might be the time of peak intensity for the first half of a very intense year. This is so because the Uranus-Jupiter opposition is still close, emphasized by Eris in close conjunction with Uranus, coming to exact by March 17th, and this opposition is triggered by Mars in conjunction with Uranus in the solar eclipse configuration. This brings into full prominence the Uranus-Pluto square, hallmark outer-planet combination of this decade, so that Pluto moves front and center into the picture, square to both ends of the opposition. Additionally, the Sun and Moon at the eclipse moment closely conjunct Neptune, allowing all the subtlety and the paradox of this numinous other-dimensional planetary archetype to hold sway. This is a quite potent brew, aimed directly at all of us, encouraging us, if we have the courage, to begin letting go of previous assumptions and habitual modes of behavior in favor of the unknown possibility.

My research has shown Eris to be a Feminine Warrior energy for soul intention. Eris and Uranus in combination lead us to the inescapable conclusion that we must strive to the utmost to understand and express our deepest truth, and act upon that knowledge no matter how unusual the messenger or how much this might run counter to the consensus thinking that we see evidenced all around us. This makes for an important catalyst, encouraging us to boldly continue with the radical structural changes of this potent decade, as indicated by Uranus and Pluto in their square alignment in support of meaningful change.

Along with Uranus, and Eris, for the March cycle both Venus and Mars are found in Aries. Mars is in perfect conjunction with Uranus in the eclipse configuration, while Venus in mid-Aries turns to retrograde motion on March 4th, introducing an introspective turn of mind and heart. We may well be looking under the covers of all our relationship motivation. Our values and our basis for feelings of security also come into greater scrutiny. Intuition and impulsiveness run strong. We may need to beware of jumping ahead so fast that mistakes or even accidents take place. Brilliant ideas become the norm, and can be useful for allowing us to think about old difficulties in new ways, or to make an imaginative leap outside the box of former conceptions.

A dynamic month of March awaits us, with the potential for either disruption or radical new beginnings. Instead of choosing to quail before the power of these changing times, let us rather celebrate them as the harbinger of a brighter dawn, for our beleaguered society, and for each one of us individually.