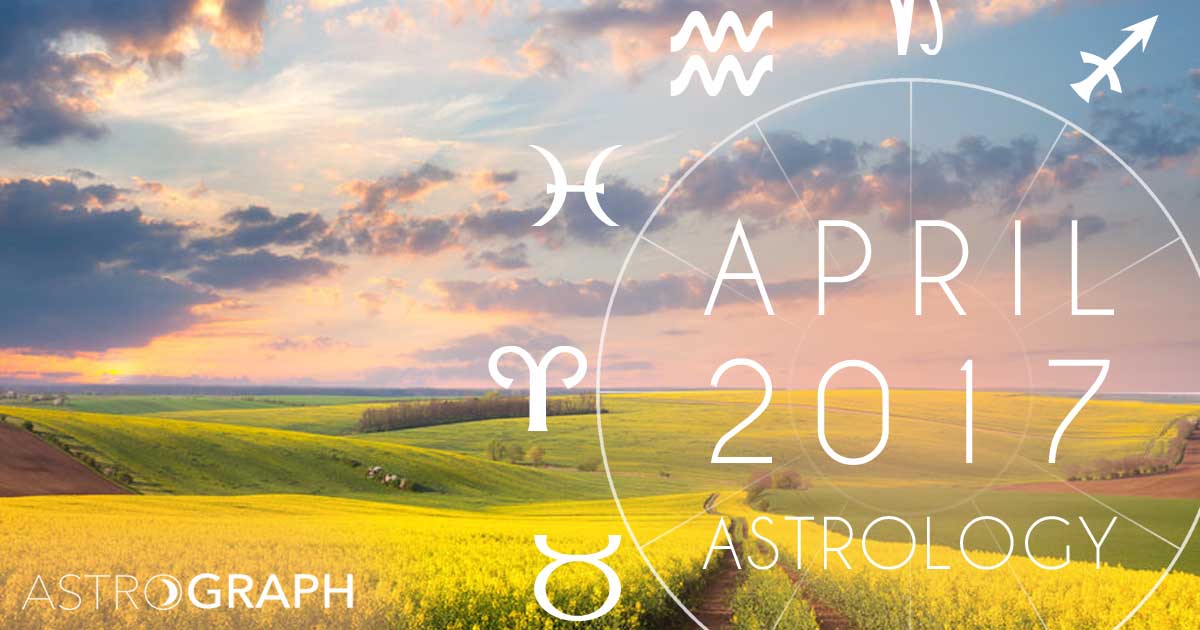 A Dynamic, Unpredictable, Transformative and Introspective month of April

Posted on March 31, 2017 in Overviews |
By Henry Seltzer for ASTROGRAPH Horoscopes

The astrology of April features Mercury, Venus, Saturn, Uranus, Neptune, and Eris. Inner planet retrogrades dominate the astrological landscape, leading to an inward-looking time, including Venus continuing from the previous month up until the 15th, and Mercury beginning on April 9th. The signs of these retrograde planets will also prove to be of great interest in a more detailed analysis, below. Neptune is strong in his own sign of Pisces, lending an air of spiritual fulfillment and, also, of confusion to the proceedings. Saturn, representing the conservative backlash to major change, is also quite powerfully placed, especially during this first week because stationing on April 5th to retrograde motion. Meanwhile, Uranus continues to be extremely prominent, due to his ongoing long-term conjunction with the new planet, Eris, which greatly strengthens his influence in the direction of an activist agenda, and the opposition between Uranus and Jupiter. While getting wider, this key combination is still active, creating a T-square to Pluto and bringing front and center the radically transformative effects of Uranus-Pluto, the signature outer-planet combination of this difficult decade. Our lives are in metamorphosis, and we are growing through the changes, and this would seem to be an inescapable fact.

Like it or not, and ready or not, we are, all of us, transforming in some level of our being. We can try to hide from it and maintain a fading status quo, or as I put it once, attempt to get back to the safety of a harbor that no longer exists, but the truth is that we are evolving along the lines that we are somehow, all along, intended to. This becomes far more problematic, not to mention painful, when we resist, thinking that we can plan our lives on our own. That is one choice of course, and it is the way that many of us proceed, moving from crisis to crisis, stumbling, as Sarah McLachlan puts it, into ecstasy. It is far easier when we can accept the Universe that surrounds us as co-creator, maybe more knowledgeable even than we are, although this is easy to say, hard to do. This is sometimes referenced as “surrendering to a higher power.” No particular philosophy of life or religious preference is implied here, although from my way of looking at things there is definitely surrender involved.

In our arc of development over this confusing and somewhat chaotic month we are aided by the meditative stance that these inner planet retrogrades of Venus and of Mercury imply. Venus is now in her Aries phase, for the remaining 584 days of her synodic cycle, having just appeared as the Morning Star, in the second degree of Aries, but she spends most of the month moving backward through Pisces. Similarly, Mercury is in a retrograde period that formally begins after the first week of April, culminating in its station to direct motion on May 3rd, closely conjunct Uranus, in Aries. This is in many ways an Aries cycle of retrograde Mercury, but it begins in the early degrees of Taurus, a very different sign, ruled by Venus. This brings up looking more closely into our values, and what truly motivates us, as does the symbolism of the Venus retrograde. The fact that Venus is now in her Aries phase, incidentally, has quite interesting implications for the empowerment of women in our society, already a growing theme.

The bottom line might be that we are examining, from many different standpoints, the way that we move ourselves forward, both spiritually and practically, and the underlying values that motivate us to do so in one particular way, or another. In these fractious times, it is important to know our deepest values and goals, and where we feel that we can contribute to the ongoing evolution of the society itself. Once we have that down, than nothing that happens “out there” can really affect us, because we are secure in our own inner compass. We know where we stand.