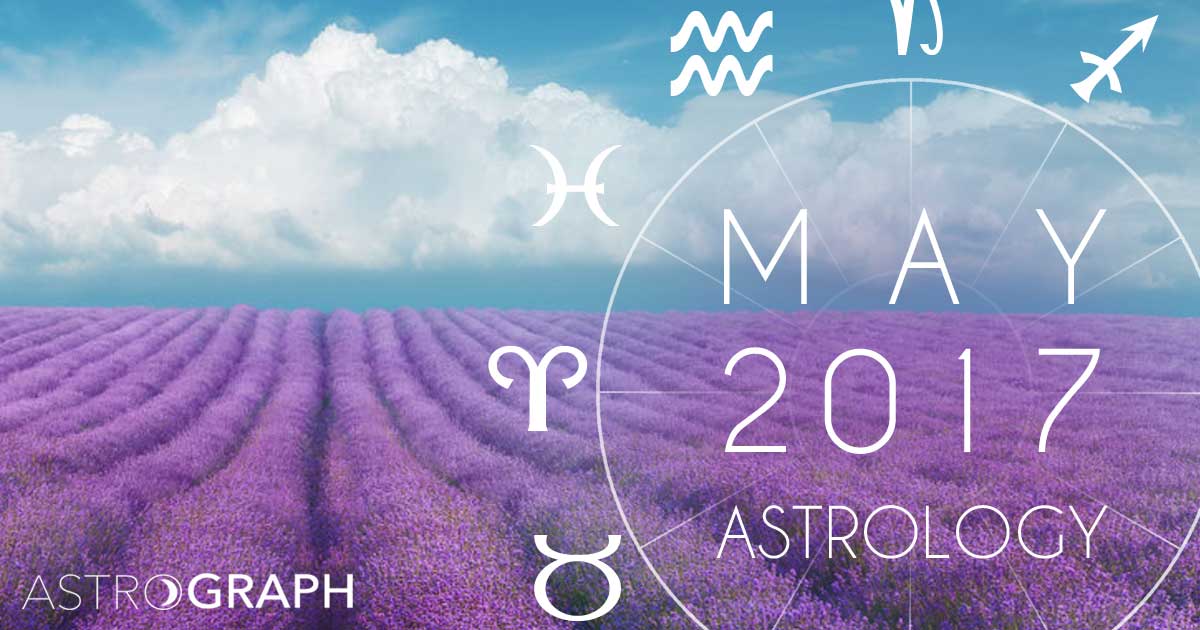 A May Month of Picking Up the Pieces

Posted on April 30, 2017 in Overviews |
By Henry Seltzer for ASTROGRAPH Horoscopes

The astrology of May features Mercury, Venus, Saturn, Uranus, Pluto, and Eris. The biggest news is Mercury, in that the Taurus New Moon from the middle of the last week of April, and that therefore kicked off the current lunation cycle, revealed a prominent Mercury-Uranus conjunction, with Mercury still in retrograde just one degree away, moving quite slowly and about to turn around to direct motion just as this month gets underway. While covering only two degrees of late Aries the entire time, Mercury remains in close conjunction with Uranus through mid-May. Coincidentally, Mercury was also closely conjunct Uranus at the previous Aries New Moon, so that we have here a couple of months of Mercury-Uranus, generating unexpected happenings, vital insights, and very stimulating thoughts and ideas, while greatly emphasizing the Mercury Retrograde period just ending. Because the Mercury Retrograde period is in any case known for reflection and introspection, we will be spending lots of mental energy sorting out tentative conclusions from the previous month as May continues to unfold.

Venus, too, is still recovering from her recent station to direct motion, which involved close long-term aspects to both Chiron, the Wounded Healer, in Pisces and, as well, Saturn in late Sagittarius. She finally left the final degree of Pisces on Friday, April 28th, crossing once more into Aries where she will spend the first half of May. In highlighting the ongoing Chiron-Saturn square Venus has brought forward into our awareness the wound of misplaced authority, whereby we fear the agency of those set up to be our governors and protectors, that they will not truly have our best interest in mind as they take action. We can see this all around us, and perhaps in the saga of our individual lives as well. All and all, this is thus quite an April legacy to be in recovery from.

The current astrological energy points to a re-stabilization of our very basis for security, both in terms of how we think about our situation, and also what we hold inside us as our most cherished values. When we truly understand what that is, as I frequently aver, then nothing external to ourselves can hurt us, because we know where we stand. This is the message of prominent Eris-Uranus, as has been the case all year, indeed, since last summer. There is a quiet rebellion of ideas and values going on (and at times not so quiet) as reflected in collective events and individual attitudes, and this month is an important part of that larger process.

The other major feature of this month’s energies is the prominence, along with Uranus, of both Saturn and Pluto. Both these planets recently retrograded, last month, and while their meaning is essentially unchanged, being outer planets, they are very nearly stationary in the sky, over the entire month. Also, they remain in parallel aspect to each other, indicating that major transformation of the structure of our lives is still coming down, again on both individual and collective levels. At the timing of the late April New Moon, Mars was also closely parallel to Pluto, highlighting that energetic wrecking ball of an astrological archetype, while the Sun and Moon in the May 10th Scorpio Full Moon closely aspect Pluto by trine and sextile.

Having a lot of Uranus and Pluto in the current month, what do we do about it? There are ways that we have each accepted the massive changes taking place within us, reflected also in our world, and yet also ways that we have of ducking the most important of these, and the only ones that we can directly control, namely the personal metamorphoses that we are each going through in our individual lives. This month calls us forth to become more aware of these changes. The fact that conservative Saturn is prominent as well means that we are deadly serious now about what is before us, unpleasant though it might be to move forward with major transformation, which inevitably implies leaving some part of ourselves behind, habitual patterns that have become outmoded or other significant factors that no longer serve us. It might help us to reflect that life itself is change. As Bob Dylan succinctly put it during the volatile 1960s “Everybody is busy being born or busy dying.” Can we face these changes squarely and come to see their necessity, or do we find further and ever more elaborate escapes? The choice is ours.