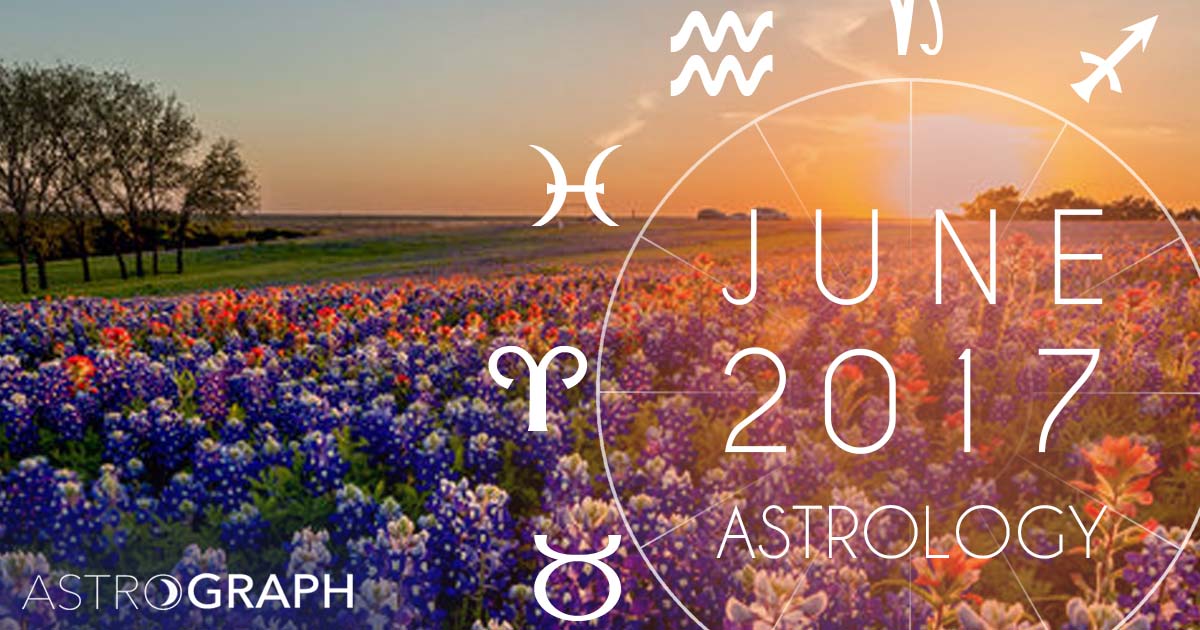 A Difficult and Transformational Month of June

Posted on May 30, 2017 in Overviews |
By Henry Seltzer for ASTROGRAPH Horoscopes

The astrology of June features Mercury, Venus, Mars, Saturn, Uranus, Pluto, and Eris. Venus finally enters her own sign of Taurus this month, on June 6th, after her long stay in Aries due to her March-April retrograde. Before the month began, from mid-Aries, Venus perfectly squared Pluto in the May 25th New Moon that initiated the current lunation cycle, and subsequently makes a perfect trine to Saturn in the First Quarter Moon of June 1st. Meanwhile Mercury enters its sign of Gemini on the afternoon of the same day. The inner planets are all powerfully placed in this dynamic month, so that our actions in relationship and in expressing our personal prerogatives are favored. Mars in the New Moon occupies an interesting degree, of 23 Gemini, placing him in direct opposition to Saturn, and in perfect sextile to the new planet, Eris, still at that degree of Aries, with Uranus nearby. Saturn is also therefore in close trine with Eris, and especially with Uranus, less than one degree separating them at the significant New Moon timing. All this adds up to an emphasis on Saturn, once again, and on the contrast between this conservative archetype of obstacles and serious intention versus freedom-loving anything-goes Uranus. This latter archetype represents – in his conjunction with Eris – the principle of taking a potentially rebellious and deep-seated position corresponding to what each one of us uniquely holds as unwavering set of cherished values, deep inside. When we can manage to take that stand, then nothing can really harm us in the arbitrary workings of the world around us, including the polarities that surround us of conservative reaction versus progressive change.

There is thus likely to be no let up as the summer commences in the extreme divergence of the national mood, both here in the United Sates and as echoed in current European politics as well. Saturn and Uranus perfectly reflect the two sides, conservative and progressive, in our ongoing conflict of opposing viewpoints. Saturn has his place however in curbing the involuntary excesses of strong Uranus, when the impulsivity reaches dangerous levels. This is true in our personal lives as well as in the collective, when the question becomes whether a contemplated action is just too much, deserving the dampening effect of applied caution.

The New Moon that began the current cycle being in Gemini, this is a thoughtful time when we are engaged in providing a logical basis for our idea and actions, although prominent Uranus does also bring a strong and perhaps illogical flavor of intuition to the proceedings. Furthermore, with Gemini’s ruler, Mercury, in Venus-ruled Taurus, there is an emotional and relationship-oriented component now to all our musings.

The death and rebirth symbolized by strong Pluto is a factor now as well, along with Uranus, so that radical transformation is still very much with us this month, as represented by the ongoing Uranus-Pluto square, the defining outer planet aspect of our troubled decade. We will want to be asking ourselves where we need to allow significant structural changes to take place in spite of our resistance to such change, and what outmoded habitual parts of ourselves need to be let go of in the process.

Finally, we must not forget that third significant outer planet archetype of Neptune, strongly aspected as well in this month’s astrological energies. The June 1st First Quarter Moon opposes Neptune, and in the Full Moon of June 9th, the Sun and Moon make a T-square to this otherworldly archetype, while Jupiter is in close inconjunct or quincunx aspect to Neptune for the entire monthly cycle. All month long, numinous Neptune colors our reality-thinking with the higher reality that takes us far beyond the grasp of the physical plane into other-dimensional fantasies and holistic perspectives. It is no longer quite so simple. With Neptune in the picture, false dichotomies of either-or, black or white, blue or red, commingle into a paradoxical way of seeing the world around us as both-and. This important and largely spiritual astrological factor can therefore provide a welcome relief from the seeming constrictive polarities of our situation.