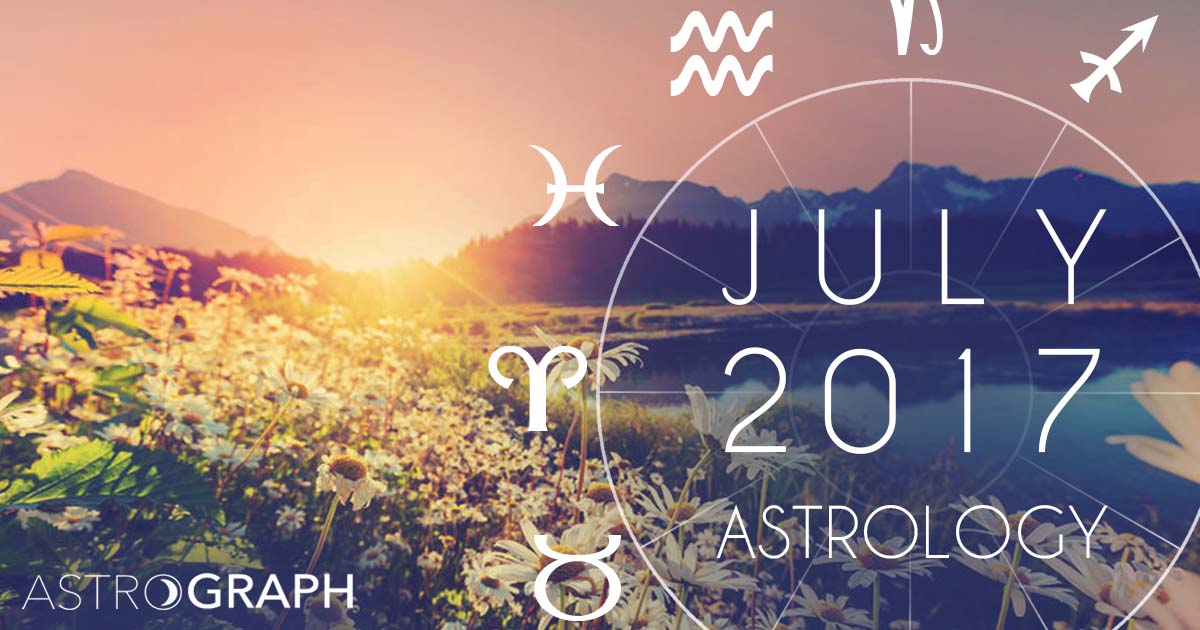 A Meditative and Emotional Month of July

Posted on June 29, 2017 in Overviews |
By Henry Seltzer for ASTROGRAPH Horoscopes

The astrology of July features Mercury, Venus, Mars, Neptune, Pluto and Eris. The recent Cancer New Moon that set the stage for the current lunation cycle, up to July 23rd, has, once again, strong inner to outer planet connections. In this potent configuration, Venus is in partile or same-degree trine with Pluto, with implications for looking more closely into our relationship dynamic, while Mars in Cancer closely trines Neptune in Pisces, aided and abetted by Jupiter in Libra. With a Cancer Mars the energy of this fiery planet is muted, and directed toward emotional realities rather than external goals. Then, too, Saturn precisely trines Eris, to the degree. Eris, the new planet beyond Pluto only discovered and named as recently as 2006, represents a spiritual warrior energy for promoting soul intention over all else. This represents therefore a greater commitment to attempting to discover, within, your most profound purpose, that which you came into this lifetime to accomplish. Meanwhile, Mercury is conjunct the Sun and Moon at the timing of this watery New Moon, making this a thoughtful and meditative month when you are likely to spend time plumbing the depths of your emotions and becoming more familiar with your inner realms.

The Full Moon of Saturday, July 8th, constitutes an important juncture, when the Sun has moved closer to Mars, deeper in Cancer, and opposite Pluto, with the Moon conjunct. July is thus a very Plutonian time, a time of change, and of letting go of what no longer serves. Pluto transits are trouble to the extent that you resist. When you can quite easily accept the inevitability of change, and move on, Pluto becomes your friend.

In addition to the might of Pluto being thrust into prominence this Cancer cycle, there is also another major power planet, namely Neptune. This numinous and delicately complex planet has a transformational aspect to him as well, like Pluto, although far more subtle. Neptune is featured in the New Moon that began the Cancer cycle, and also the July 8th Full Moon, when Jupiter has moved to an even more perfect trine with Neptune. The July 23rd New Moon in the first degree of Leo also aspects Neptune by sesquiquadrate, so that we have a Neptune-filled month. This archetype is closely connected to the vast unconscious realms within you, which are also brought forward by Mars in Cancer. This is the seat of our emotions, and many of our emotional strengths, as well as our potential hang-ups. This latter is mainly the case when we allow complexes to build up inside us, by not paying sufficient attention to the messages that the unconscious parts of ourselves are trying to get across to us. The lesson for this month is to pay close attention to everything that happens, dreams included, and to take even chance occurrences quite seriously. Neptune also helps us to see the world around us as paradoxical, rather than black and white, either or. A famous psychologist of the 20th century, Thomas Moore, who wrote Care of the Soul, has written: “the nature of the soul is paradox.”

Another event that is taking place this month is the station of Eris to retrograde motion, on July 20th, just in the timing of the Leo New Moon a few days later, and closely trine Saturn. Saturn too is slowing down, preparing to station direct in August, and remains within 2 degrees of a perfect trine to Eris for the remainder of the month. This brings to greater prominence their combination, which could be summarized as a strong commitment to discovering soul intention. There is something within you, of which you might already be aware, that urges you on to a particular outcome. This depends on your most profound values, your most cherished goals; whatever it is that, once you are fully aware of it, you cannot NOT do. It is possible that this month will supply clues to this important factor that arises from deep within you.