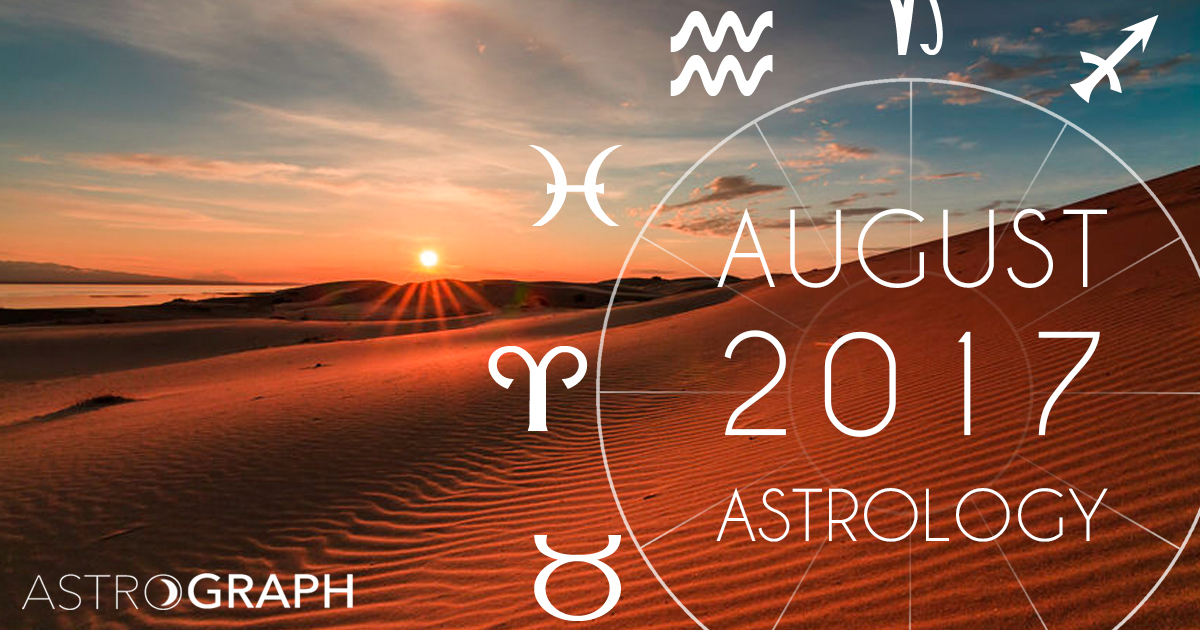 An Active and Transformative Month of August

Posted on July 27, 2017 in Overviews |
By Henry Seltzer for ASTROGRAPH Horoscopes

The astrology of August features Mercury, Mars, Jupiter, Saturn, Uranus, Pluto, and two eclipses. Mercury is retrograde the last half of the month. The Lunar Eclipse and Full Moon of Monday, August 7th, features a strong presence of Pluto, as well as Neptune, while the recent Leo New Moon that set the stage for the current lunation cycle, up to the August 21st Solar Eclipse, has a strong presence of Saturn, which is moreover stationing later in the month to direct motion. Saturn remains in close parallel with Pluto all month long, so that structural transformation and conservative empowerment, the hallmarks of Saturn-Pluto, are very important themes for the August period. A grand trine in Fire signs between Saturn, Eris, and Mercury is also present in this recent New Moon, indicating that your sense of mission and commitment is still very present for what you most deeply believe. You win by taking an individual stand for where you think that your evolution is truly headed, and that act forms a piece of the whole, just like your own personal hologram. The society at large benefits greatly – and fails on the lack – of the sincerity of all these individual strands.

An important factor of the Lunar Eclipse of August 7th to be mentioned is Neptune. The eclipse Moon falls directly on the Neptune/Pluto midpoint, while Jupiter, the Sun and Uranus closely aspect Neptune as well. Mercury stations retrograde on the 12th, opposite Neptune, making for an introspective time. With Neptune invoked there is an element of deception, including self-deception, uncertainty and spiritual ramification involved in this important juncture. Eclipses are more powerful lunations, with symbolic effects that last longer, up to six months, than an ordinary Full Moon. The angst that we are, all of us, beginning to feel has these Neptunian components, and on the cultural level, also concern regarding the earth’s oceans. Of course, climate change is becoming a more and more prominent theme, as we speak, as are issues of sea-level rise and the acidification of ocean waters with the consequent dying off of all coral reefs, world-wide. These issues are not going away, and, again, it is very much a question of mass consciousness and political will concerning these very serious global problems.

The August 21st Solar Eclipse, also in the sign of Leo, makes an almost perfect trine with Uranus, while Saturn is also greatly emphasized, bringing the familiar triumvirate of Saturn, Uranus, Pluto which was prominent in the volatile sixties. We have in the latter part of the month not only the highlighted presence of Saturn but also the increase in polarization implied by Saturn-Uranus and as well the major and thorough-going transformation symbolized by Uranus and Pluto in combination, just as their square begins to draw somewhat closer, coming to within 6 degrees by the end of the year. We may expect further fall-out from this decade of change the last half of this year, as we mentally begin to approach the power-packed configurations of 2020 and beyond. There is quite a lot that we have to face in the coming years. It is not only the massive structural changes that we are in the midst of, both culturally and individually, but also, more significantly, the mass recognition of this.

What can one do? Well there are plentiful forms of escape in our modern-day culture, and certainly television and/or drugs among others seem almost perfectly designed to take our minds off what is happening. And, yet, there is also the quiet joy of deeply examining where you are really at, reflecting long and hard on this idea to find your bottom line beliefs, and taking some sort of a stand for these. It might be as simple as writing a letter while you toil away at an unwanted job, or it might be as courageous as leaving that job, headed for unknown outcomes, for the sake of your deeper values. Whatever it may be, each action in support of soul intention is so freeing and empowering that it can ultimately lead to peaceful calm in the midst of the storm.