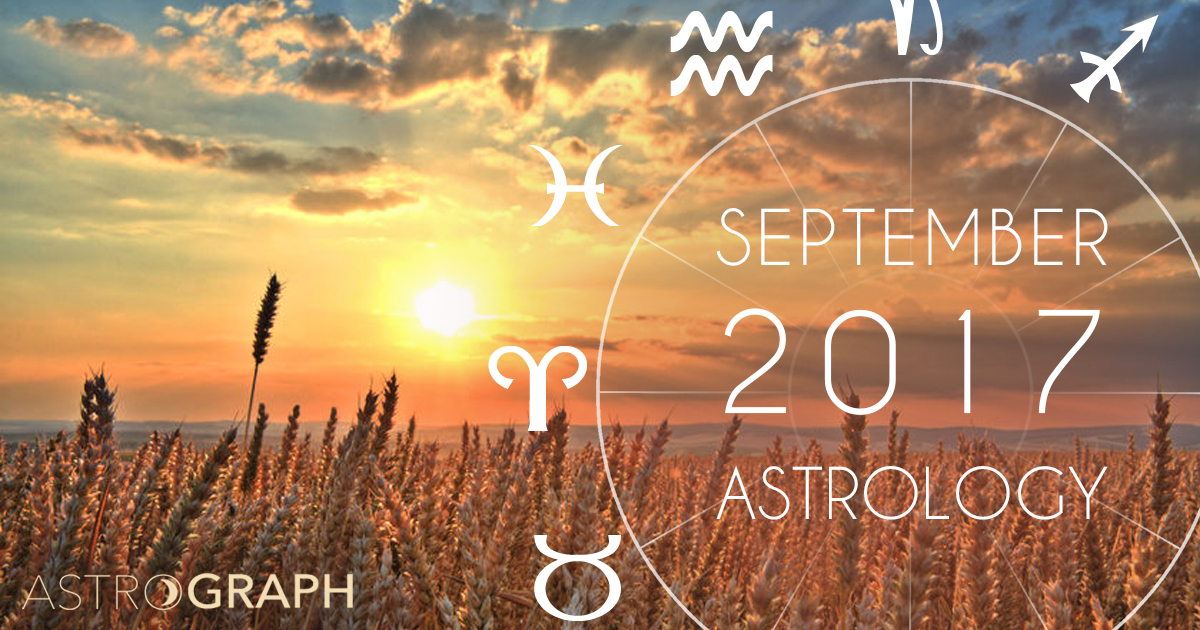 An Introspective and Surprising Month of September

Posted on August 30, 2017 in Overviews |
By Henry Seltzer for ASTROGRAPH Horoscopes

The astrology of September features Mercury, Mars, Jupiter, Saturn, Uranus, Neptune, and Pluto. Mercury is still retrograde as the month begins, stationing to direct motion on the 5th and finally escaping its retrograde shadow on the 19th. Mars was involved in a grand trine in Fire signs with Saturn and Eris in the timing of the very powerful New Moon and solar eclipse of August 21st that initiated the current thirty-day lunation. Mars also conjuncts retrograde Mercury at the eclipse degree on September 3rd, just before his entrance into Mercury’s sign of Virgo on the 5th. Because the solar eclipse was in partile trine with Uranus, echoed in the New Moon of September 19th, we may expect weird doings all month long, plus unexpected enlightenment, “in the strangest of places.” With the new planet, Eris, emphasized as well, representing a spiritual warrior energy in support of soul intention, we are likely to come much closer to a true understanding of what motivates us at deep levels, especially if we are paying attention.

Neptune is definitely involved in the changes and the challenges of September. For one thing, the Full Moon of September 6th precisely conjuncts Neptune. Then, too, Jupiter aspected Neptune at the August 21st eclipse event, while, when Mercury stationed retrograde, it was opposed to Neptune, initiating an unusually strong retrograde period that is completing by the 19th –taking the retrograde shadow into account. We have seen uncertainty, confusion and deception, including the possibility of self-deception, in various ways, both collectively and individually, while there has also been a marked spiritual component to at least some of the recent happenings. Because Mercury stations to direct motion on September 5th precisely on the eclipse degree, the entire retrograde period continues to be quite strong, and productive of dreamy introspection.

Pluto, too, is significantly invoked, being closely parallel to Saturn all month long, right through his station direct in late September, in minor aspect to the Sun and Moon in the eclipse New Moon, and aspected by Sun, Moon, Venus, and Mars in the September 6th Full Moon configuration. Since Uranus is so prominently positioned, in partile trine to the August 21st event, plus in another partile aspect, an inconjunct, to the September 19th Virgo New Moon, we have yet another instance of powerfully placed Uranus with highlighted Pluto, while their distance from each other is once again shrinking. By the methods proposed by seminal astrologer Richard Tarnas, their square lasts until 2020. The remainder of this decade and particularly the last half of 2017 will see further acknowledgment of massive change for each individual, and in the surrounding social structures.

Finally, it is also interesting to note that Chiron, in late Pisces, is almost exactly opposed by the September 19th New Moon, within a degree. Chiron represents the archetype of the Wounded Healer, and thus the latter half of September promises to be filled with even greater general feelings of angst, as well as greater awareness about how trauma stemming from early childhood can invade the present moment. Our very fears, together with feelings of lack of self-worth, may have the effect of holding us back from being all that we can be, even through strong inherent desire to articulate and embody our ideals. In the present context of major changes that affect everyone, this might be considered a form of “future shock,” in which we are fearful because so unsure of where as a society we might be heading. The antidote for all this psychological suffering is two-fold; first we must have faith in an essentially benevolent universe to have our best interest at heart and to sustain us, easier said than done of course, and secondly, we must have faith that we can solve the conundrum of our individual existence by getting in touch with ourselves at soul-level. By tuning in to intuition and our own inner voice, we can inhabit more of our higher self, presenting us with the needed courage to articulate and act upon our most treasured vision.