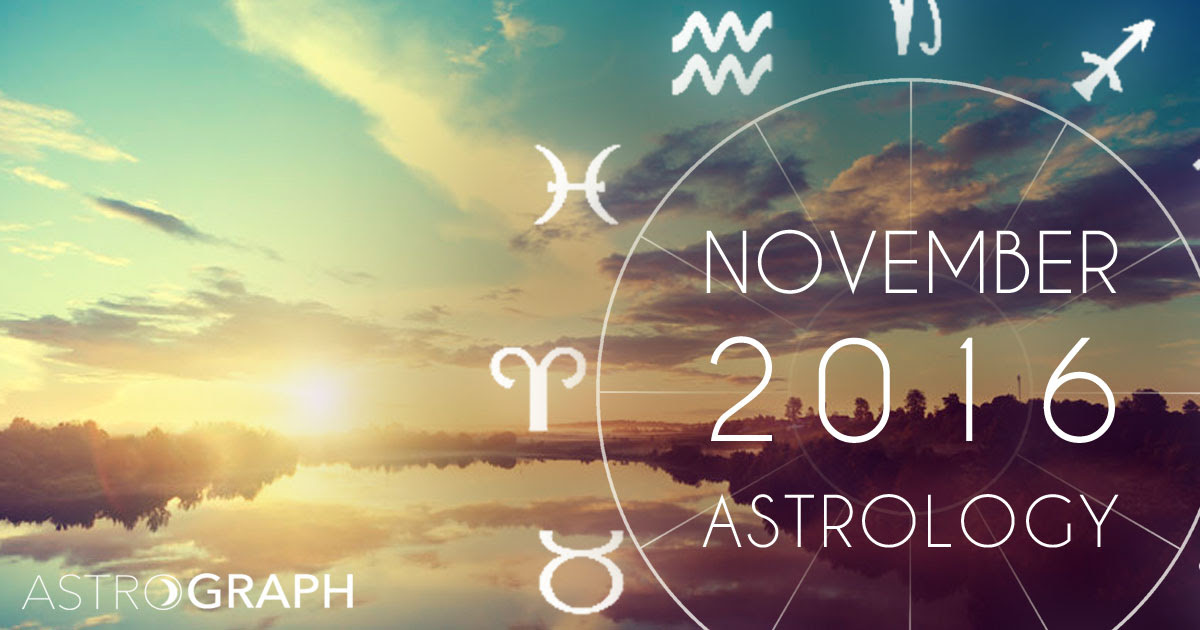 A Transformational November of Taking a Stand

Posted on October 30, 2016 in Overviews |
By Henry Seltzer for ASTROGRAPH Horoscopes

The astrology of November features Mercury, Venus, Mars, Saturn, Uranus, Neptune, Pluto, and Eris. All the outer planets are strongly represented in the New Moon and Full Moon configurations, so that, as the month continues to unfold, our awareness of the transformational intensity of these times that we are living through is ever-present. The October 30th New Moon sets the stage for this powerful November cycle, bringing forward into the picture the astrological factor of thoughtful Mercury, in close conjunction with the Sun and Moon that day, and representing greater consciousness and a species of abstract logical analysis. The sign placement of these personal planets being Scorpio becomes an added factor of emotional intensity that stirs us deeply, especially when we consider that Mercury is in partile or same-degree trine formation with the Pisces placement of numinous Neptune. We are therefore this entire month experiencing a compassionate and a highly idealized time of recognizing what we all hold deep inside ourselves, that directly connects with, and supports and underlies, the surface details of all our activities in the visible physical plane that we more consciously inhabit.

As befits this Scorpionic time of the year, the surface layers of our more normative comings and goings are only part of the story now, with the vast unseen realm of unconscious process taking a major role in the characterization of this month’s true activity. Neptune, along with the other outer planets, represents access to numinous realities beyond the purely physical, the significant life of our deep internal process. This is the vast unconscious realm, deep within, which Freud and Jung first annunciated in the early 20th century, and which finds even greater credence today. The highlighted placements of Uranus with Eris, and of Saturn and Pluto, complete the roster of planetary significators, also including Venus in close aspect with Mercury and Mars at the timing of the mid-month Full Moon that punctuates this rather intense monthly cycle.

The new planet, Eris, beyond Pluto, only named as recently as 2006, represents the astrological archetype of Spiritual Warrior: that is to say the determination to stand up for what one most deeply believes, at soul level. This energy is strongly highlighted now, and is thus prominent on our inner radar, because still within little more than a degree of Uranus, and closely squared by Mars, in the timing of the New Moon that initiates the Scorpio cycle. The question that comes up for everyone quite poignantly these days is whether you can find that inner urge for true achievement, what you feel, at the most profound level, that you must, at all costs, accomplish in this lifetime. This might have nothing to do with success in the eyes of the world, but is nevertheless vital from the standpoint of an inner drive, deep within, for what feels most important.

This month of November represents quite a ride. When we see in the timing of the First Quarter Moon of Monday, November 7th, that the Sun and Moon are closely aligned with both Saturn and Pluto, in the same degree that they occupy, in the two signs between, and that Saturn is almost exactly in parallel aspect with Pluto, we can be sure that in some profound and completely individual fashion, the structure of our lives is changing. We can see this also in the collective, where this thought can give us courage as we come to understand that we are not hopelessly enmired in an existing status quo, but that everything, even the underlying social fabric of our lives, is in serious flux.

With the Full Moon of the following Monday, November 14th, at the 22 degree mark of Scorpio, the same degree that Eris occupies in Aries, we come to a culmination of these remarkable two weeks, the launch point for the remainder of the November cycle. We come as well to a better understanding of what we have going on deep within us. This includes the necessity for standing up for ourselves, and for our most deeply held values, no matter what.