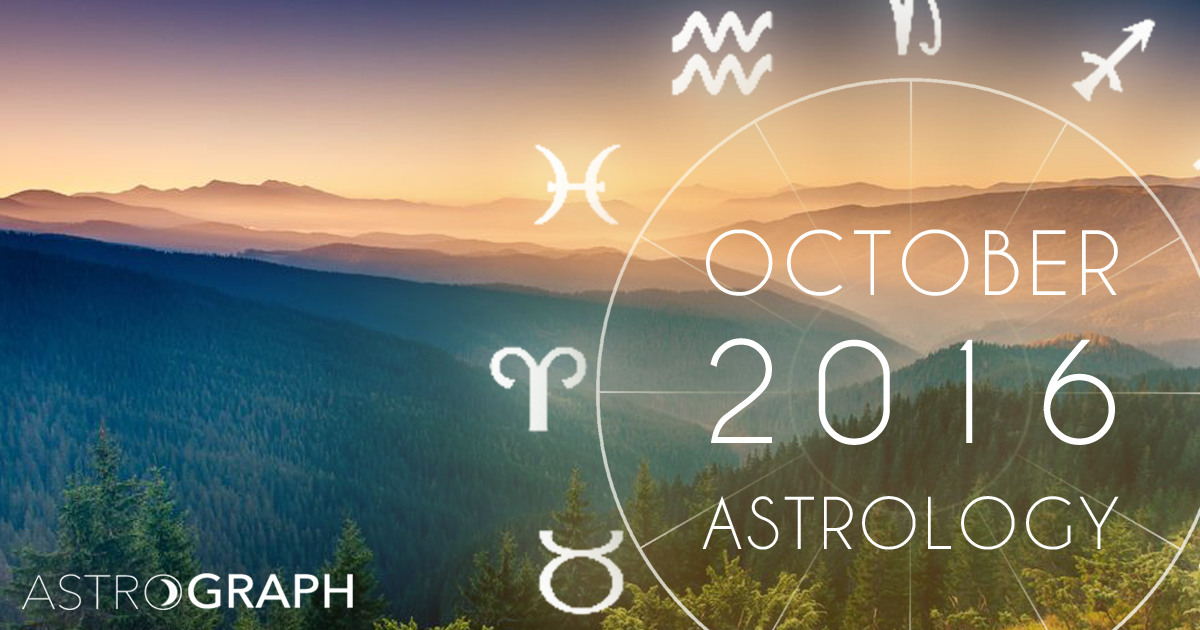 An October Month of Transition

Posted on October 1, 2016 in Overviews |
By Henry Seltzer for ASTROGRAPH Horoscopes

The astrology of October features Venus, Mars, Saturn, Chiron, Uranus, Neptune, and Pluto. This is an exciting month, especially considered as a follow-up to a relatively quiet September, which was primarily one of inner spaces and deep introspection while Mercury was retrograding through Virgo. Now Mercury begins to come out of his shell, and as it does, aspects Chiron, the Wounded Healer, by a close opposition. The September 30th New Moon, which took place in fair-minded Libra just before the current month of October began, sets the stage for the current thirty-day cycle. All that emphasis on Chiron during the previous month carries over into this present October cycle, highlighted by Mercury’s opposition and the Moon as well as Jupiter in close contra-parallel to Chiron, as Chiron also aspects Uranus, in their continuing close semi-sextile. Venus is exactly trine Neptune as the month begins. Through the first two weeks of October, also, Mars moves ever closer to his mid-month conjunction with Pluto. All the outer planets are in fact emphasized by the lunations of this monthly cycle, presaging a time that could prove to be excellent for improved awareness regarding hidden factors of our personalities that secretly drive us.

Venus in trine with Neptune being such a powerful astrological indication for this fall month makes for a dreamy and aesthetic time, when not everything seems completely realistic in mundane terms. Neptune has the ability to take us away from the here-and-now physical realities of our situation, by means of either fanciful escape, such as books, movies, drugs, and other vacations from ordinary living, or else by profound spiritual experiences that can color our world in extraordinary ways that leave it no more the same. It requires discrimination to sort out which is happening, and fortunately we have this also, in good measure, in the strong placement of Mercury, moving into Libra and in conjunction with Jupiter in the timing of the Moon’s First Quarter.

The potent Aries Full Moon of Saturday, October 15th, has much to reveal to us. With this Full Moon in perfect conjunction with Uranus and also with the new planet, Eris, we are in for a very powerful Full Moon weekend and second half of he month. Uranus is doubly emphasized, because one effect of Eris is to magnify in significance every planet that she touches, and the Moon at the Full adds weight to this factor, as do aspects from Venus, Neptune, and Chiron. We are simultaneously receiving a shot of trickster Uranus, and a boost of energy for standing up for ourselves in our more profound intentionality. Uranus brings startling events and surprising enlightenment, as well as important intuitional understanding of the archetypal universe that underlies our earthly existence. Eris, archetype of the spiritual warrior that is present in each one of us, encourages us to reach deep inside for the best that we can offer, the values that we hold inviolate, unique unto ourselves, so that we rebelliously refuse to be swayed by the lure of ordinary consensus thinking.

There is also a stronger presence than has been recently the case of transformative Pluto, still to be found in mid-Capricorn, indicating that the structures of our individual lives, and of the life of our culture, are in major transition. Mars gets closer and closer to Pluto as the month continues to unfold, being nearly exact by the timing of the Full Moon, when Mercury is precisely square to Pluto.

Uranus and Pluto, both emphasized in this present monthly cycle, and still widely in square alignment, retuning to a few degrees by the beginning of the year, form a collision of archetypal energies that does not abate until 2020, and constitute a one-two punch that opens the door for revolutionary change. Uranus brings the factor of enlightenment, a way to see and avoid the chains of habit that block our perfect inner vision, so that we can become aware of where we need to be heading. Then, Pluto provides the wrecking ball that knocks over the existing structure to make way for the new and untried. This combination was the hallmark of the volatile 1960’s and is making a renewed appearance in our fractious decade of the Turbulent Teens, paving the way for real change that will follow.