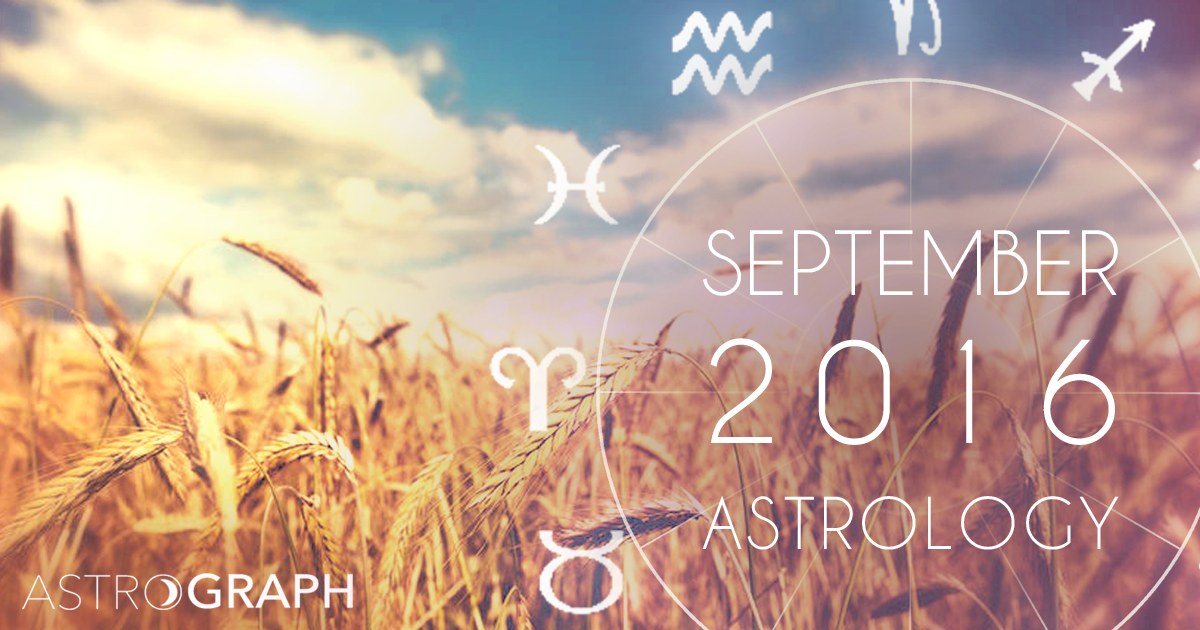 A September of Introspection and Realization

Posted on August 29, 2016 in Overviews |
By Henry Seltzer for ASTROGRAPH Horoscopes

The astrology of September features Mercury, Jupiter, Saturn, Uranus, Neptune, and Eris, plus two eclipses. First and foremost is the dramatic New Moon and Solar Eclipse in Virgo that kicks off September, with a bang, in the early morning hours of Thursday, September 1st. This is big energy for moving ahead, that is also however very much muted by the ongoing retrograde of Mercury through this same sign. This is a very strong Mercury Retrograde period, lasting throughout the month (taking the shadow into account) so that rather than paying attention to strictly outer events, we are more attuned to inner realms, and in taking an introspective viewpoint. Mercury only stationed to backward motion at the end of August, in the last degree of Virgo, in close forming conjunction with Jupiter. This last factor is a potent one, magnifying the usual effects of missed connections and mechanical breakdown. This time period is not a great one for getting things done, or for stepping off into new departures from pre-existing plans. It is however the perfect time to review and revise, and to research new possibilities, with the details to be fleshed out more thoroughly in October, after the retrograde period has run its course.

Neptune, too, is quite prominent in this New Moon configuration, being directly opposed by the Sun and Moon. The strength of this numinous archetype is also greatly enhanced by Saturn, in close forming square now with Neptune, bringing a tone of serious and practical intention to his otherworldly excursions, flights of fancy bordering on illusion, and compassionate spiritual presence.

At the same time as escape from (or transcendence of) reality is strongly indicated by this New Moon configuration, so is a sense of limitation, restriction, and resulting frustration, as symbolized by Saturn, squared by the Sun and Moon, and aspected as well by Uranus. Trickster Uranus, still closely conjoined by the new planet, Eris, representing a Feminine Warrior energy for soul purpose, is an unsteady planetary archetype of sudden moves and unexpected enlightenment, and therefore represents still another archetypal contrast with stodgy, reactionary old Saturn. Uranus and Neptune, together, are prone to formulating higher thoughts, taking mankind to a new level of spiritual evolution, for example starting new religions, as astrologer Richard Tarnas has successfully demonstrated in his groundbreaking tome of outer planet combination, Cosmos and Psyche.

To go along with a particularly strong Mercury Retrograde period, that starts off with Mercury conjunct Jupiter, we therefore have higher and more positive thoughts dominating our minds and hearts. This is in contrast to the frustrating four weeks of trying to get things done that is also in the astrological cards for everyone as we cross through the trials and lessons of a dicey September. With Uranus and Eris in combination being highlighted as well in this extremely powerful New Moon eclipse, there is an impulse for following inner guidance to right action. Eris stays close to Uranus through the end of the year, and beyond, conjoining once more in March and April, 2017. All this time we remain in an innovative space for the impulse to act out in responding to our deepest proclivities and yearnings.

The Full Moon of Friday, September 16th, which is also a penumbral, or lesser, eclipse, presents loads of further nudges from the cosmos, and in directions that we have secretly needed to go. For one thing, the Moon in this dramatic Full Moon conjuncts Chiron, the Wounded Healer, in Pisces, the same sign as Neptune, while Venus, Uranus, and Eris also aspect this important little planetoid. Chiron is known to be involved with deep inner process, such as diving down and exposing to consciousness the raw wounds of past, unresolved trauma. These likely stem from the time of early childhood. Uranus and Eris are also greatly triggered In this Full Moon Lunar Eclipse, being opposed by Venus, and closely aspected by retrograde Mercury.

To summarize, in a month full of stops and starts, with the occasional wild impulse for freedom, and yet an introspective cast of mind that prefers thinking it over several times to anything like direct action, you are also discovering and renewing your faith in the place inside you that wants to break away into what feels more like your own personal destiny. This urge is only stimulated by the notion that some of the traditional, or perhaps outmoded, rules of the social road might need to be broken, or, at the very least, bent. We are making our way through a journey of interesting and challenging development this month, and there is plenty of energy for thinking outside of the proverbial box as we do so.

Are you ready to take your knowledge of astrology to the next level? ON SALE NOW!

Buy Now for $47.00 Download Demo Learn More
Dates given for astrological events are based on U.S. Pacific Time. Add or subtract hours as appropriate for your actual time zone; for example, East Coast, add 3 hours; Western Europe add 8 or 9.