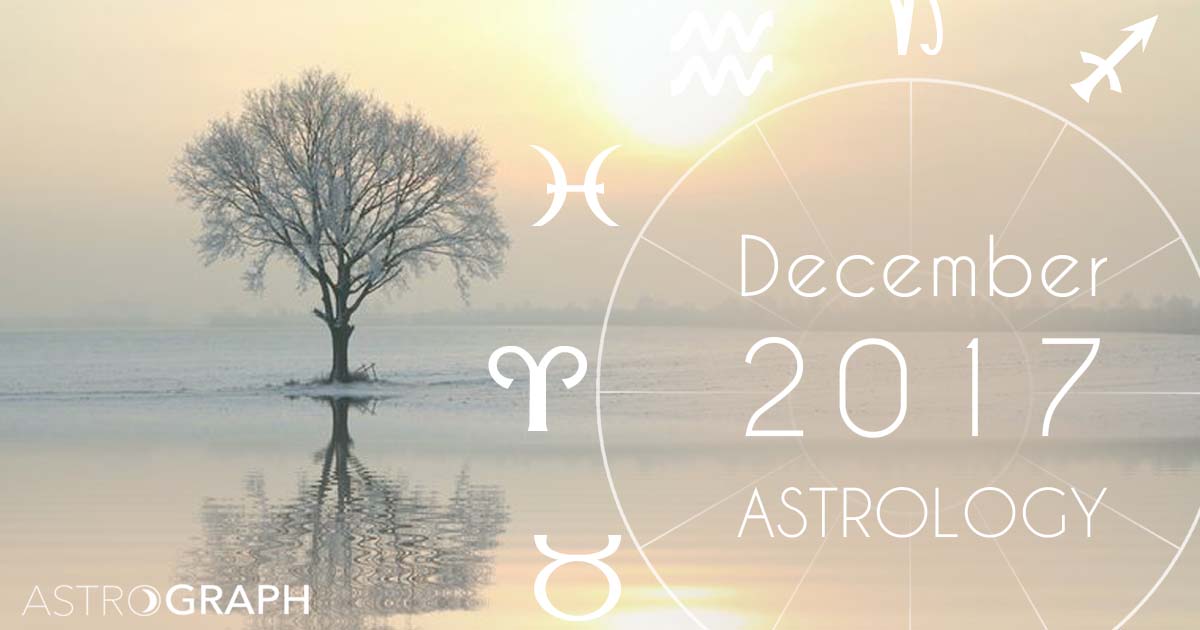 An Introspective and Potentially Confusing December

Posted on November 29, 2017 in Overviews |
By Henry Seltzer for ASTROGRAPH Horoscopes

The astrology of December features Mercury, Venus, Mars, Saturn, Uranus, Neptune, and Pluto. This continues to be a very Uranian time, since the New Moon that began the month was again in close aspect to the Trickster planet. Pluto too was then emphasized, lord of Death and Rebirth. Then, too, Mercury retrogrades near the beginning of the month, bringing the usual symptoms of missed connections, mechanical breakdown, and deep introspection on where your life is taking you, at this end-of-year timing. The house position in your own chart of the Mercury Retrograde, as it moves backward through the last half of Sagittarius, will be an interesting clue as to what area of life is coming up for you, for reflection, meditation, and potential revision. It is significant that Mercury, as it stations late evening of December 2nd, early morning of the 3rd, the same day as the Gemini Full Moon, which it rules, makes a precise alignment with Neptune. This was true at the last Mercury Retrograde period as well, when Mercury was opposed to Neptune. This time it is a minor aspect, a quintile, or 72-degrees, but it is still quite telling. We are therefore once more in for a rather intense Mercury Retrograde period, with a distinct spiritual component. For any difficulties that arise, the question we will want to be asking ourselves is what higher purpose does it serve.

Mercury also conjuncts Saturn as it stations, and then after a few days, moves back across this planetary archetype of limitation and taking on extra burdens. This implies that we will find, amidst all our reflections and intellection, a growing sense of responsibility to natural law and our best intentions. Venus, in mid-Scorpio in the timing of the Scorpio New Moon that began December’s initial cycle, enters Jupiter-ruled Sagittarius on December 1st. With Jupiter still in Scorpio, we are likely to continue to see further investigations into sexual misconduct, along with a greater focus on positive solutions. Mars, representing male energy, enters his own sign of Scorpio, on December 9th, and sextiles Pluto during the first week of the New Year, which may again, as the square did on the weekend of November 18th, bring up issues of anger management and the potential for change in the way that we conduct ourselves during interpersonal confrontation.

It is important to note that the beginning of the month does present some challenges beyond the strong Mercury Retrograde presence, namely that the Full Moon of December 3rd makes a very tight T-square to Neptune, with Jupiter in close trine. Because the numinous Neptunian energy does not settle well in the physical plane, this first half of December makes for strange days, and spiritual ones. The best way to accommodate this influence is to learn to embrace paradox; the idea that there is not necessarily only one truth when dealing with issues of the soul. Depending on the situation, we might have to deal with illusion or self-deception, or at times being ourselves deceived, until we arrive at a fuller picture.

With the entrance of Saturn into Capricorn on December 19th, and the Winter Solstice of December 21st, we find that both conservative Saturn and forward-looking Uranus are quite intensely highlighted at this Winter Solstice leading us to the New Year. In the Sagittarius New Moon of December 17th, just preceding these dates, we find a Sagittarius stellium of five planets that includes retrograde Mercury. We also find in the New Moon timing a trine from Sun, Moon, and Venus to Eris and Uranus in late Aries just two degrees apart. Eris represents an amplification of the trickster energy of Uranus, and symbolizes in her own right the warrior impulse to speak truth to power whenever necessary. This therefore signals a joyous and rebellious final two weeks of the month, when the urge is strong to speak out for deep soul-level intention, and when the existing social status quo is even more in question than it has been in recent months. As we head into 2018 and the further political polarization likely to accompany the mid-term USA elections, we have quite a lot of inner searching to do in order to figure out where indeed we stand, and what we are willing, in the face of a conservative agenda to preserve oligarchic power at all costs, to do about our most bottom-line beliefs. As we head into a largely uncertain future for the earth and our place within it, the time is indeed come to stand up and be counted, wherever your own beliefs may land, for the sake of your children, your children’s children, and everyone you know.