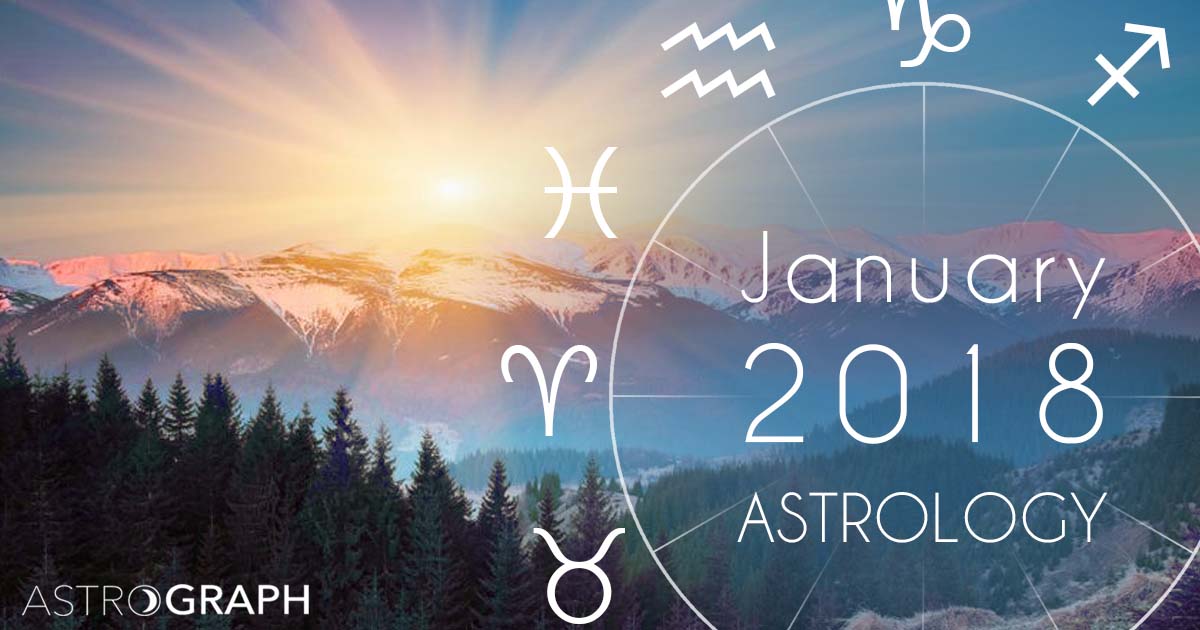 A January of Progressive Impulse and Conservative Holding Back

Posted on December 29, 2017 in Overviews |
By Henry Seltzer for ASTROGRAPH Horoscopes

The astrology of January features Venus, Saturn, Uranus, Neptune, Pluto, and Eris. As we have been saying for months now, this continues to be a very Uranian time, since the Sagittarius New Moon that preceded January made a close trine to the Trickster planet, while the Capricorn New Moon of the 16th demonstrates even greater highlighting of Uranus. Individuality therefore runs high, and there is a rebellious impulse to do unexpected things in branching away from what is perceived as a dysfunctional status quo. Countering these indications of a progressive agenda is the powerful presence of Saturn, strongly highlighted in last month's Winter Solstice as well as in the lunations of the first two weeks of January, when Pluto is also greatly emphasized. All the traditional outer planets are very much in play this month, with the January 1st Full Moon making a close trine aspect to Neptune, signifying numinous feelings of divine insight as well as confusion and illusion in the horizontal physical realms here below. This implies that we have a both a difficult passage into the New Year and, as well, a golden opportunity to develop character and to make progress along the lines of our highest intention toward renewed spiritual evolution.

What makes Uranus so strong right now, in addition to the close aspects made by these New Moon configurations, is an interesting story. First of all, Uranus continues to be in close conjunction to Eris, the new planet only discovered and named in the early years of this century that is turning out to be incredibly significant in charts. Eris greatly boosts in influence any planet that it touches, along the lines of soul purpose. This is the archetype of the Feminine Warrior, the one who, male or female, acts with great forcefulness in accordance with deep soul-level intention, no matter what the consensus attitude, or what anyone else around them might think or say. There are also aspects to Uranus from Chiron and Neptune at the beginning of the month, and from Mars at the timing of the mid-month Capricorn New Moon.

Saturn continues to be parallel to Pluto, prominent in the first degrees of is own sign, and is quintile to Neptune in the timing of the December 17th Sagittarius New Moon that began the lunation cycle effective over the first two weeks of January. With Saturn now in Capricorn, the surface theme is difficulty and also greater commitment in making things happen for yourself, completing projects, fulfilling plans, and so on. While arriving more slowly, the result is worth the wait and the lessons longer lasting. The deeper theme of Saturn, however, is that everyone take greater responsibility for the social matrix that surrounds them, and for seeing appropriate evolutionary changes through to fulfillment and completion. In this, the higher octave, as it were, of Saturn, the message fundamentally echoes that of Uranus, also quite prominent now as detailed above, and also of Eris. It being urged upon us that we take a stand for what we most deeply believe in, and to take action benefiting our society, now on life support, while there is still time.

Mercury enters Capricorn on the 10th, thereby escaping the final traces of its December retrograde period, known as its retrograde shadow. We have each been mulling over the area of our lives indicated by the house or houses that Mercury has been passing through, hopefully along the lines of eventually making needed changes in these areas.

In another change of sign, Venus leaves Capricorn for freedom-loving Aquarius on the 17th, right after the Capricorn New Moon. Venus is very prominent this month, especially on January 8th, when the First Quarter Moon highlights a triple conjunction with the Sun and Pluto. Everyone feels the pull toward relationship transformation and improved connection with important partners.

At the very end of the month, a Lunar Eclipse on the 31st presages a further dose of illusion and confusion, and also idealism, because the Sun in mid-Aquarius is semi-sextile to Neptune. This is the first of two eclipses, the second being the Solar Eclipse of February 15th in late Aquarius, conjunct Mercury and sextile to Uranus. What does this tell us about the remainder of early 2018? It seems that we are in for a thoughtful time of revolutionary change, with massive structural shifts taking place at both obvious and also subtler levels, affecting individuals and the entire collective. We are off and running for even greater societal transformation coming up in just two years' time, with the incredible astrological configurations of 2020.