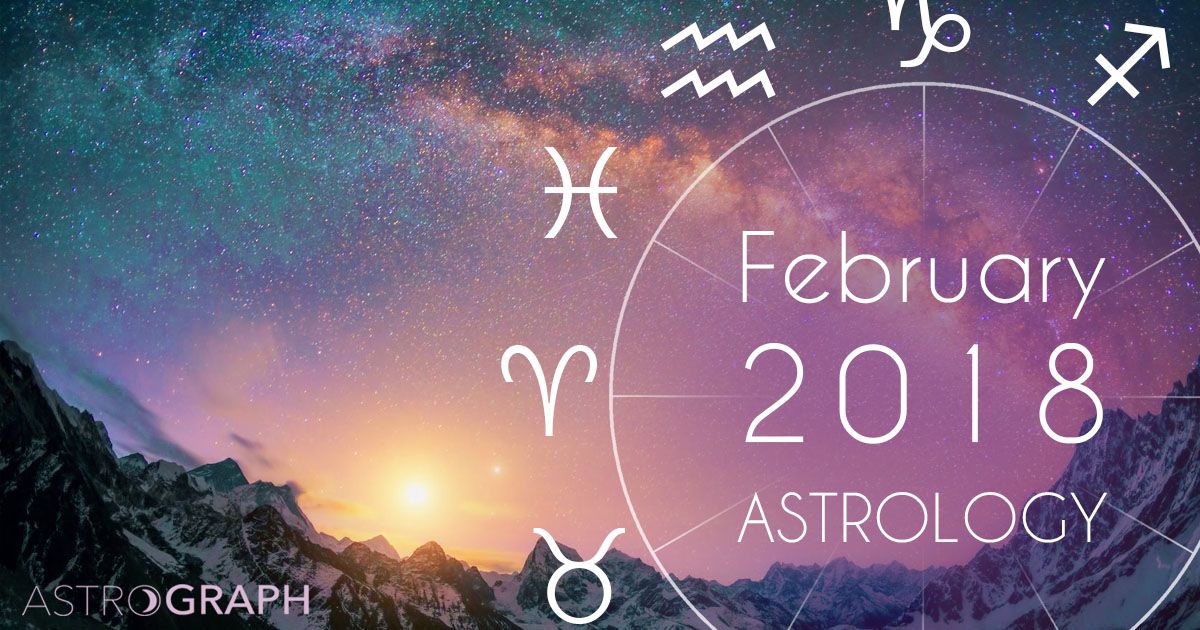 A February of Brilliant Ideas and Otherworldly Agendas

Posted on January 31, 2018 in Overviews |
By Henry Seltzer for ASTROGRAPH Horoscopes

The astrology of February features Venus, Mars, Saturn, Uranus, Neptune, Pluto, and Eris. All the outer planets are triggered this month, including Eris, which has been revealed as a spiritual warrior energy for acting from the standpoint of deep commitment to inner soul-level values, so important for these times of radical change. Uranus, Neptune, and Pluto, the classical outer planets signifying massive societal evolution, are all configured quite strongly in the New Moon events that initiate the first and the final two weeks of February. In the January 16th Capricorn New Moon from last month we find a wide conjunction between the New Moon and Pluto, with Jupiter in close sextile, within minutes of a degree, while simultaneously the Sun and Moon closely square Uranus and semi-square Neptune. In the Solar Eclipse New Moon of February 15th we again find Uranus emphasized, while Pluto is now within two degrees of his significant forming square with Eris, which stays close through 2020, and beyond. It is extremely interesting to note that the Uranus-Pluto square has influence through to this climactic year as well, when Eris and Uranus begin to finally separate by 15 degrees and when Eris closely squares a triple conjunction of Saturn, Jupiter, and Pluto late in the year. These next two years of 2018 and 2019 are thus vitally important in the lead-up to this time. This is an urgent call to action. Everyone is being entreated by the universe that surrounds us to lend a hand to the transformation of our society, with make-or-break consequences for our families, our locality, and our world.

The personal planets Venus and Mars are also very prominent in the configurations of February, implying that interpersonal relationships are still front and center in the cultural zeitgeist as we continue to mull over the consequences of inequalities of power and privilege between young and old, between levels of personal wealth, and between the sexes. The rising feminine spirit is a vital part of our society’s renewal. Because Neptune is also prominent now, especially so in the timing of the lunar eclipse from the 31stof January, just before the current month began, there are also many confusing ideas of what to believe, from various sources. It is a time when we have to go inside for the answers to our most confounding issues, trusting in our intuition to supply the necessary key. This is a symbolic time, when we are, each one of us, acting out the myth of the hero, surmounting whatever obstacles we must in order to bring back the elixir of a peaceful and fulfilling life to the surrounding social matrix in which we have our being.

Jupiter and Uranus, both emphasized in the powerful solar eclipse of February 15th, make for a plethora of fresh ideas appearing on the scene. Meanwhile, we will want to remember that Saturn, too, is empowered at this time, continuing to give rise to the marked polarization in the cultural sphere, both in this country and in other parts of the world. It takes judgment to know when to hold back and when it is necessary to throw caution to the winds and move ahead; and it takes courage, having made that determination, to act on it.

Jupiter, preparing to station at the 23-degree mark of Scorpio within the next forty days, makes a powerful inconjunct aspect to Eris in Ares over this entire period. This implies that, not surprisingly, all through this current month of February, and beyond, we have quite a large dose of the archetype of the Feminine Warrior, speaking truth to power. This new planetary archetype is all about having the courage of our convictions, once it is that we are able to turn inside, and discover our inner values, that in which we most deeply believe. The urgency of these times requires that we make the effort to understand what we want to accomplish, and then proceed, in spite of everything that arises to stand in our way.