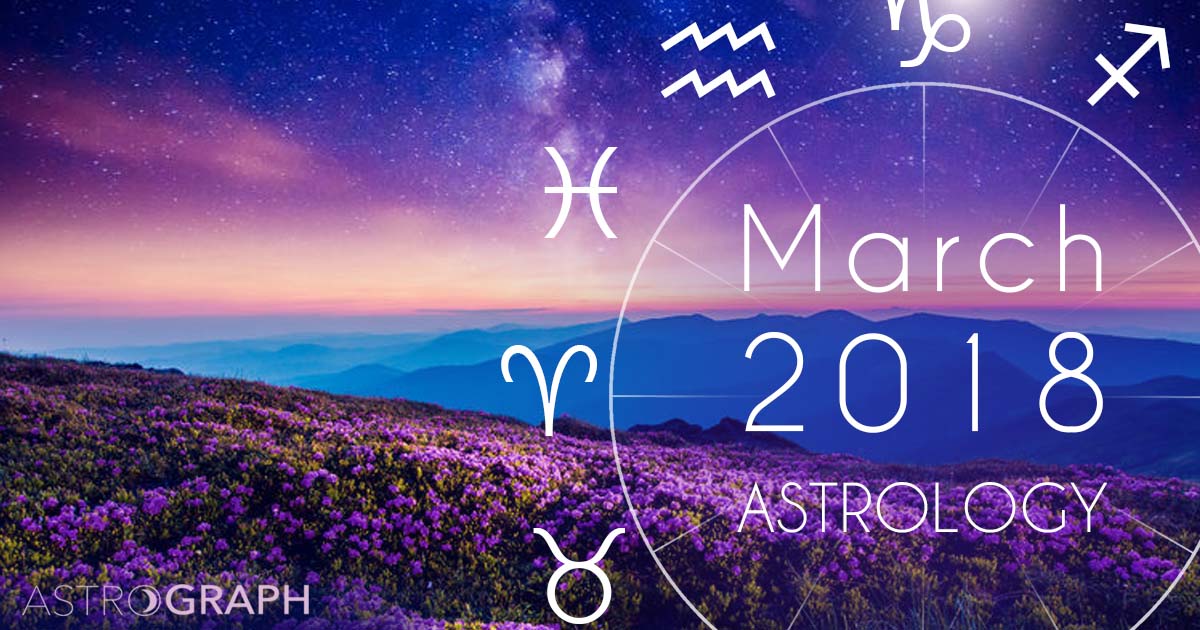 A March Month of Intensity and Introspection

Posted on February 27, 2018 in Overviews |
By Henry Seltzer for ASTROGRAPH Horoscopes

The astrology of March features Mercury, Venus, Mars, Jupiter, Saturn, Chiron, Uranus, Neptune, and Pluto. This is quite a list, because the inner planets all conspire with the timing of the lunations to stimulate one another and, as well, be stimulated by the outer planets, including Eris. This new planet, functioning as a Feminine Warrior energy in support of soul intention, continues to be highlighted, with Jupiter making a partile inconjunct aspect to Eris as he stations early in the month. Mercury travels with Venus right from the beginning of March, in the timing of the March 1st Full Moon in Virgo, and conjuncts her on the 4th . Never much more than 2 1/2 degrees separates them, right through to the Vernal Equinox of March 20th, when we find them once again in partile conjunction, in Aries. After that, Venus pulls ahead and Mercury stations retrograde, on the 22nd. Mercury with Venus, in this long conjunction, implies that we will use our heads as well as our hearts in assessing where we stand, individually or in pairs, and also implies an unusual degree of integration of all the different areas of our lives in the midst of a meditative and self-reflective monthly period.

Mercury and Venus are also square to Mars as the month begins, with Mars in partile semi-sextile to Pluto, signifying great intensity of active striving as well as the possibility that suppressed anger could surface. This is in the context of a very powerful Full Moon with the Sun conjunct Neptune (and with the Moon opposed) implying that motives might be misconstrued or over-idealized at this March onset. Jupiter is powerfully placed also, as indicated above, so that lack of caution or blue-skies over-optimism goes hand-in-hand with this strong placement of Neptune, prince of illusion, in his own sign. Uranus is also quite powerful at this time, being strongly aspected by both the mid-March New Moon and as well the previous New Moon and Solar Eclipse from the middle of February that made a close sextile to Uranus. This means that as we make our way through a potentially confounding time, we do better to think outside of the strictures of the normal 3D world, instead invoking the mystical dimensional place where Uranus and Neptune really shine. They are not so much at home in the physical, and there may sow upset, discord, or confusion.

If we can get past the implicit dangers and dysfunctions, then we can let Uranus in as the Awakener, and Neptune as the compassionate sense of the unity of all beings. As new Thought explains it, “there is truly only one of us here.” Of course, we also have to live in the physical world and feed our bodies and our egos in that way. In a theme sounded by a current Hollywood film that might even win the Oscar, we are sometimes the shape, and sometimes the water.

Pluto, too, is emphasized now, with Eris making a closer and closer square alignment to Pluto, closing in on 23 degrees of Capricorn as the decade continues to unwind. Massive transformation is in the air as 2020 draws nigh, and transformation is never easy nor pain-free.

In that regard, it is extremely interesting to note that the March 17th New Moon is conjunct Chiron, the Wounded Healer, located in late Pisces. Venus in conjunction with a stationing Mercury in mid-Aries tightly aspects Neptune, which is in partile semi-sextile with their midpoint. The underground world of unconscious process is thus very present to us in this second half of March, together with the potential for uncovering hidden trauma. We will have to attempt a consciously peaceful and insightful attitude in order to gracefully transcend the difficulties of these next few crucial years, beginning with this year of 2018 and these pivotal months of March and April. Yet, still, we must act. We must stand up and fight for what we deeply believe, and oppose what needs to be opposed. The challenge is huge, but the rewards are great, and the alternative increasingly dire.