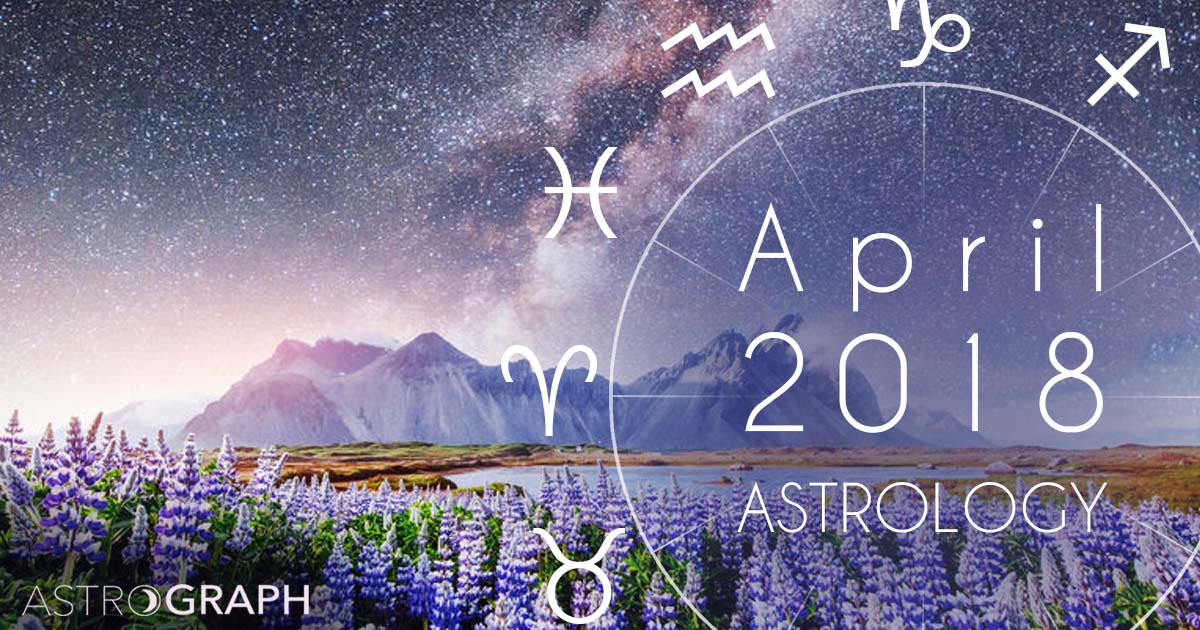 An April Month of Introspection and Transformation

Posted on March 30, 2018 in Overviews |
By Henry Seltzer for ASTROGRAPH Horoscopes

The astrology of April features Mercury, Mars, Jupiter, Chiron, Uranus, Pluto, and Eris. This is a month when Mercury is retrograde all month long, when you take the period of Mercury’s retrograde shadow into account. This is the two weeks or more required for the tiny “messenger of the Gods” to recover its lost zodiacal longitude, and return to the sixteen-plus degree mark of Aries, where it started. As it stationed a week before the end of March, Mercury was conjunct Venus and also Eris, indicating a time of deep reflection on important values, and closely aspecting expansionist Jupiter. This is thus a truly powerful Mercury Retrograde period, when much within you will be subject to a process of reflection and introspection. The eventual goal is nothing less than a more complete awareness of inner values, and of what you are attempting to accomplish in this lifetime. Prominent Uranus in Aries, in exact aspect to the Sun and Moon in the Pisces New Moon that began the current cycle, as well as being conjuncted by the powerful New Moon of April 15th, indicates that there will continue to be surprises, and surprising enlightenment, in the mix. This is an important outrider to the interior process that we all find ourselves in the midst of during a pivotal first six months of 2018. The earlier Pisces New Moon was also conjunct Chiron, the Wounded Healer, indicating that inner wounding is a likely subject of our current contemplations. You are now very aware of the occasions of earlier trauma in your life, with hopefully the eventual result of beginning to move beyond them.

As I have written about many times before, the Chiron effect is to focus on problems connected with early childhood trauma and to speed healing these issues by bringing them closer to consciousness. Because prominent in the recent mid-March New Moon, this is up for pretty much everyone during the first two weeks of April, especially those with concentrations in the mutable signs. In working with your own personal astrology, you would look to the house position of Chiron natally, and as well to the aspects it makes, for clues. Almost always, when reactivity arises, it is based on core issues that stem from the trauma of particular incidents with parental figures or with early siblings or peers, and become buried away, walled off behind a veil of suppression. The hurt child within does appear, however, when triggering takes place. Instead of turning away from these facets of ourselves, the recommendation is to make friends with these cast-off parts of you that still yearn for the comfort and caring that was missing at the time of the earlier traumatic event. As a more fully conscious adult, with effort, you might be able to supply it. This has the tremendous result, when you can pull it off, of removing blocks to progress in many areas, allowing you to become the person that you were always meant to be.

There is also a large degree of transformational movement that is activated during the second half of April, following the Aries New Moon of April 15th. Pluto is emphasized in this timing because the Sun and Moon together square Pluto in Capricorn, while Venus and Jupiter, in their forming opposition to each other, also make major alignments to Pluto. With Uranus also emphasized, conjuncted by the Sun and Moon in their precise New Moon conjunction, this second half of April is a powerful time. Saturn remains parallel to Pluto, indicating that major structural life changes are in the works for all of us. While we might recognize that these are necessary, accommodating to them is another matter; no change ever comes easily. Yet, with faith in ourselves and in the guiding hand of the universe, great things are possible.

The last full week of April, kicked off by the First Quarter Moon of the 22nd, when the Moon in Leo squares the Sun newly in Taurus, and aspects Chiron now in Aries, indicates anther quite potent timing when all the above issues are up for further research, exploration, and trial by fire. Mars is closing in on his conjunction with Pluto, Lord of the Underworld, accompanied by Pluto’s station to retrograde motion on the same day. Reactivity could arise. This is quite a potent archetypal stew that will further test our ability to keep up with major change taking place in our lives, and also see us through an important crisis of working these out. If we are doing our work, we emerge tired but elated, into the dawn of a new stage of our earthly existence.