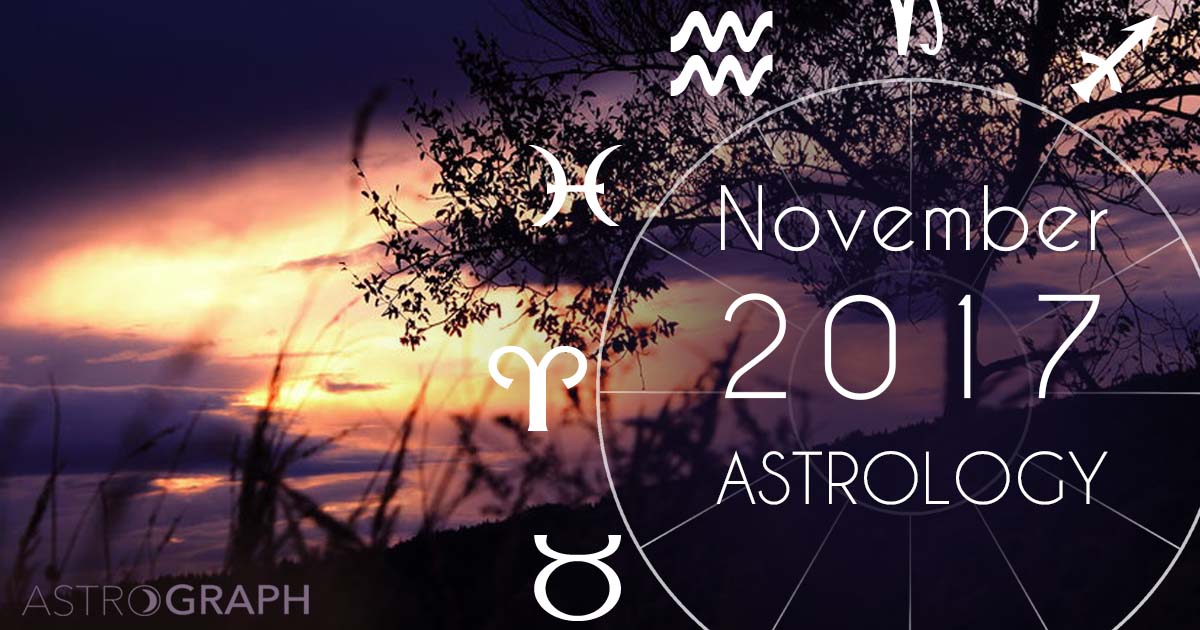 A Surprising and Mystical Month of November

Posted on October 31, 2017 in Overviews |
By Henry Seltzer for ASTROGRAPH Horoscopes

The astrology of November features Venus, Jupiter, Saturn, Uranus, Pluto, and Eris. This continues to be a very Uranian time. The Libra New Moon from the last twelve days of October was directly opposite Uranus, and in the same degree of its sign as the degree Uranus occupies in Aries, therefore presaging another month of unexpected events and surprising enlightenment “in the strangest of places.” This is especially so, since the November 3rd Full Moon features another partile opposition to Uranus, this time from Venus in late Libra. The New Moon toward the end of the month also closely aspects Uranus. With Neptune and Saturn additionally emphasized at this time, we have quite an outer planet stew available to us, so that the primary result is to help us grow as individuals, and as humans. As well as his role as the Trickster, Uranus is also the Awakener, allowing us to see beyond where we have been able to go thus far. Saturn represents sticking to the known facts of the matter, refusing to enter new emotional or psychic territory, and his prominence creates something of a tug-of-war within us. The push for moving forward is balanced by the pull to remain in the safety of shallow waters. Add to this prominent Neptune, aspected by the Sun and Moon at the Full Moon near the beginning of the month, and we have the signs of a spiritual mission that we each are undertaking, to move beyond previous limitations.

Also this month, the Full Moon in Taurus comes with a numinous factor, namely the close aspect that the Sun and Moon make to the other-dimensional planetary archetype of Neptune. There is practicality in the sign of the Moon itself, and yet this contrasts with the unreality – at least in terms of the physical – that Neptune brings to the equation. With Neptune activated in his own sign of Pisces, we are never entirely sure of our ground, and must learn to embrace paradox as a natural element of life. Things in the earthly plane usually have their binary yes and no, as far as what works, but the nature of the soul presents a subtle misty realm that is either – or both. When we navigate these mystical realms we are exploring the unconscious, which operates by its own rules. It is nevertheless vital that we attempt the exploration.

Another factor in this month’s astrology is the trine between Saturn and Uranus, now coming to its perfection. This reveals the fundamental polarity of these times, between progressive and regressive tendencies within our society; the urge for moving forward with new ideas and the conservative desire to hold back, for reasons of safety. These twin and competing goals are also present in each individual psyche, and you may want to more consciously mediate between them. Do I go or do I stay? Do I take a chance on a new beginning that feels promising, or forever linger in the shallow water of tried and true pathways? It is up to you to decide.

It is worth noting that Saturn also closely connects with the new planet, Eris. This archetype of Feminine Warrior energy in support of deep soul intention has quite recently emerged to be an important factor in charts, as documented in my book, The Tenth Planet. The basic message is that it is up to each of us to make a difference, in whatever way that we can, if we wish to see a future evolution that is to our liking. With Saturn, issues of fairness come to the fore, as revealed in the “Me too” movement that begins the vast job of correcting the documented misdeeds of the past on the part of persons in power, usually men, against those who are not, usually women. The impact of “natural law” is thus revealed, and must somehow be made more available in our rapidly changing society.