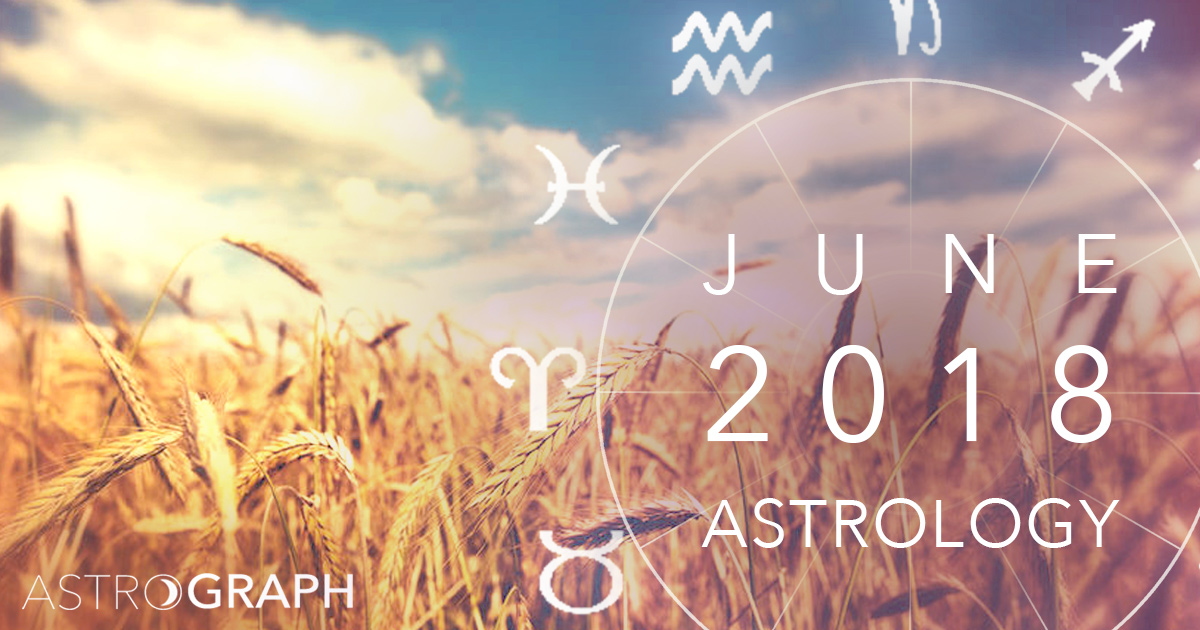 A June Month of Troubled Waters and Spiritual Bridges

Posted on June 1, 2018 in Overviews |
By Henry Seltzer for ASTROGRAPH Horoscopes

The astrology of June is quite rich, featuring Venus, Mars, Chiron, Saturn, Uranus, Neptune, Pluto, and Eris. The focus on Venus, Mars, and interpersonal relationship that came up with the May 15th Taurus New Moon continues into the second half of June, with the additional impetus from the Gemini New Moon of June 13th. At that time, Venus is closely contra-parallel to Mars, also to Saturn and Pluto, making her quite prominent for the entire month. Our relationships – and the very concept of partnering – will be on our minds and in our hearts, with also be opportunity for hidden areas of complexes regarding relationship to come to light. Transformational process therefore has plenty of grist for the mill. Uranus and Pluto, their square signifying massive cultural evolution, are both prominent as well, with Uranus in perfect square alignment to Mars in the May 15th configuration, and squared by Venus in the mid-month Gemini New Moon. Pluto is then strongly aspected by the Sun and Moon as well as being squared by Eris, now and through to 2020. The process of transformation indicated by Uranus in fading square with Pluto is suddenly aligned with the Earth element where it powerfully indicates major structural changes in our individual lives, and in the very fabric of society. Tempering the accompanying sense of culture shock is the growing realization that we are, each one of us, our own center and arbiter of values, especially when we can tune into and act upon what we most sincerely believe. This is the message of Eris, Feminine Warrior for soul intention, prominent in the May 15th configuration and closely sextiled by the position of the June 13th New Moon in Gemini. We can resist the feeling of being mere pawns in a game played by forces beyond our control when we can allow ourselves to rise to the occasion that the times demand of us, giving our all. At this point it doesn’t matter what the outcome might be, for we know that we have done our best to articulate where we ultimately stand, and that is enough.

In addition to all of the above indications, the fact that Jupiter is closely trine Neptune, as Neptune stations mid-month, brings a decidedly otherworldly ambience to the proceedings. While Neptune represents that which is literally beyond this three-dimensional world, being best represented in the arts such as music, poetry or dance, in some ways this potent outer-planet archetype is more fundamental than the physical to our human existence – as an experience of Beethoven’s ninth symphony shows us. There is a transpersonal dimension signified by these outer planet archetypes that forms an important part of the human psyche and that in many ways absolutely drives it. The experiences of this month are imbued with this spiritual dimension, which we call in shorthand angel presences, God/Goddess, or the power of the universe to guide us.

Mars remains in parallel with Pluto and with Saturn, bringing the three traditional malefics of medieval astrology into connection with each other. This could indeed have disastrous consequences, a great deal of difficulty in getting things done, for example, or suppressed anger exploding, and yet there is an upside. This is especially true when these alignments are viewed through the lens of modern psychological/archetypal astrology. Utilizing this perspective we might imagine a more constructive vision of long-lasting lessons about our assertive nature, or the transformation of anger into love.

Chiron, too, is quite prominent this month, being located in the first few degrees of Aries, while Uranus occupies similar placement in Taurus, and Mercury does also at various timings, most particularly in the June 13th Gemini New Moon when Mercury, it’s ruler, squares Chiron within a quarter of a degree, while relationship-oriented Venus comes into trine. Another boost to the energetic presence of the Wounded Healer comes with the Summer Solstice of June 21st, when the Sun opposes Saturn in Capricorn, and closely squares Chiron. We are therefore being made more greatly aware of inner wounding all through the month of June. This is the result of early childhood trauma remaining in a stuck and walled-off place deep within the psyche. These hidden complexes are, again in modern terms, not to be feared or shunned, but rather embraced as opportunities for growth. Getting to more completely know yourself in these dark places within you pays rich rewards in terms of eventual integration and healing.