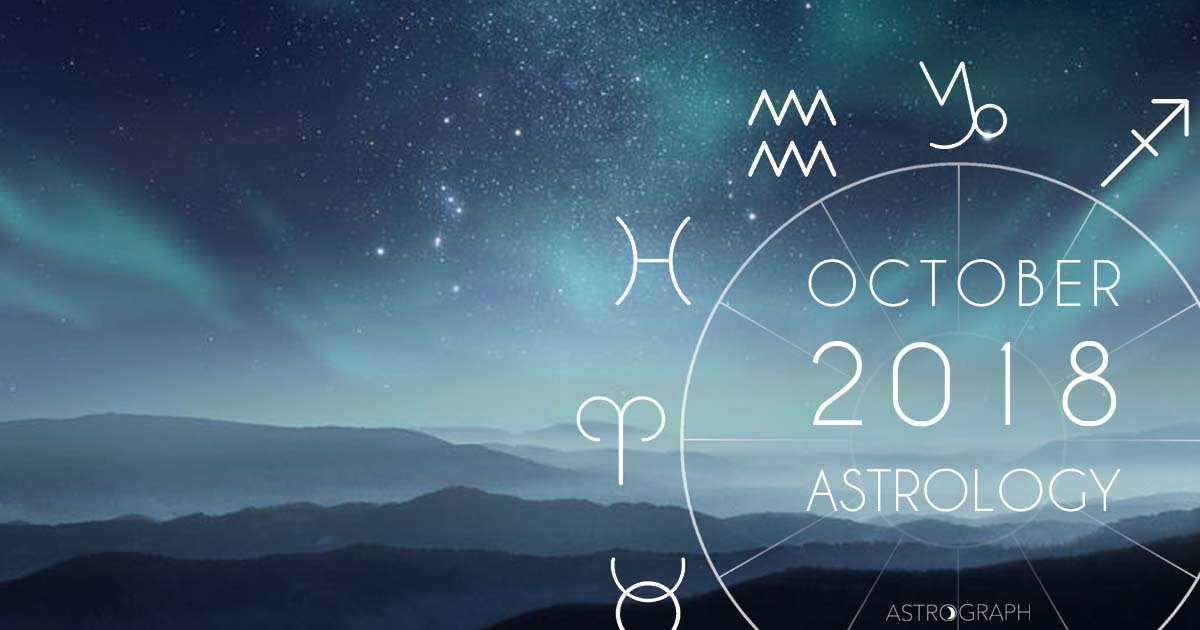 An October Month of Reevaluation and Transformation

Posted on September 30, 2018 in Overviews |
By Henry Seltzer for ASTROGRAPH Horoscopes

The astrology of October is rather intense, with outer planet archetypes still highlighted. This indicates that major transformation, both personal and societal, remains front and center even after many months in a row of this theme. To go into the particulars, the Libra New Moon of October 8th features a square from Sun and Moon to Pluto, which, having only very recently stationed, is practically standing till in the sky. This New Moon, at 15-plus degrees of Libra, also makes a close inconjunct to Neptune in mid-Pisces. Furthermore, one week before the advent of October, the Aries Full Moon made an extremely close T-square to Saturn. With Pluto so prominent, along with Saturn and Neptune, we need only look to Uranus to complete the picture of massive transformation that has been the hallmark of recent months, and of this decade. Uranus is also currently featured, being closely aspected in the Aries Full Moon by Sun, Moon, Mars, and Saturn, while the Libra New Moon of the second week of October also features a perfect parallel and an opposition between Mercury and Uranus. I put all these astrological details on the table to give you the concrete evidence that in the sky, as well as in the culture, and individually, there is a remarkable intensity and exacerbating of transformational energy and of polarity. As above, so below. Certainly no one would care to argue that especially in this country we have not seen even further escalation of liberal versus conservative polarization in the week leading up to the start of the month; and this is likely to continue.

Another important feature of this month’s astrology is the pending retrograde of Venus through Scorpio. This, having already started, since Venus is in the degree from her station, begins officially on October 5th, with Venus at 10 degrees of Scorpio and 50 minutes. Venus is set to leave this sign for late Libra only at the very end of October. The next day, November 1st, Venus makes her Heliacal Rise in the first degree of Libra, when she becomes once again the Morning Star. She is thus considered to be a “Libra-oriented Venus” for the next 584 days of her synodic cycle with the Sun. This implies that diplomacy and compromise could eventually win out as we move into the year 2020. As far as this current month, the period that is coming up on October 20th, when Venus is in her darkest phase before becoming the Morning Star – disappearing from the evening sky and invisible because in such solar proximity – was thought by the Mayans to be a time of unsteadiness in human affairs, and “the embarrassment of the ruler.” It does in fact seem as if the grip that this president has had over congress might seem to be slipping just a bit. The timing of the Venus retrograde through the sexually oriented sign of Scorpio, lasting through October, would also seem to be a predictive factor that the most recent Washington DC scandal, namely the allegations of sexual misconduct being brought forward by several self-declared victims of Supreme Court nominee Brett Kavanaugh, might have many more weeks to run.

And how does this most recent inner planet retrograde affect us in our individual lives? We will be in an introspective mode, searching for the hidden meaning and motivation behind our values, potentially including the source our finances, and all our relationships. You might want to think about what area of life the sign Scorpio represents, as far as house position, in either your natal chart or the chart derived from your Sun sign, since this is another place that this retrograde might manifest. In any case, there is likely to be a reevaluation taking place, which goes hand-in-hand with the transformational intensity of these times, which devolves in the final analysis to a question of priorities – what aspects of your personal and professional life will go and what will stay.

Another featured outer planet is Eris, in Aries, aspected by the Libra New Moon and by a partile inconjunct from Jupiter in that same timing. The invitation of Eris, spiritual warrior energy for soul intention, is that you get in touch with your deepest values, discover what truly moves you, and go on from there, fighting tooth and nail for what you most sincerely believe. This is quite compatible with the symbolism of Venus retrograde, that you look deep within yourself to uncover your true values and motivations. The combination with all the transformational intensity of this month is infectious, calling for us to recognize that we are each here to live a life of purpose and meaning, and that we may reach out into the cosmos – and deeply within ourselves – to hear the voice of truth that calls us forth to our highest path. This message is simultaneously, and perhaps not coincidentally, aligned with what both conservatives and liberals are saying these days to their base: that you get out and get on with it, being sure to vote, once you know in your heart what it is that is worth the battle.

Right now you can get 25% off your Relationship Astrology Report: