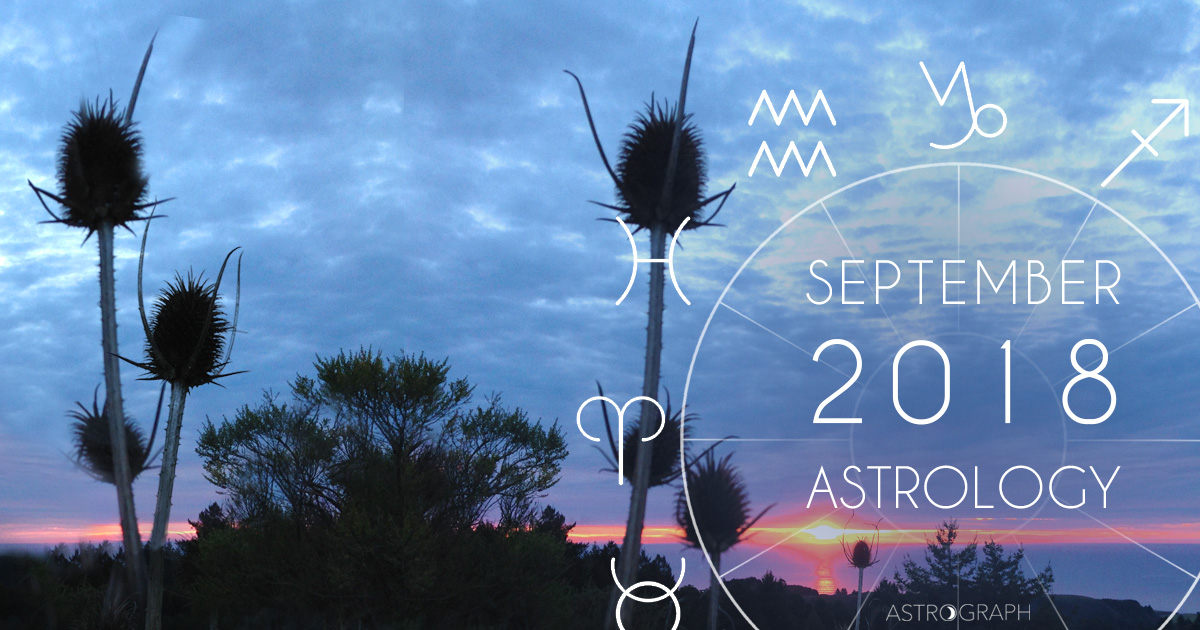 A September Month of Transformation, Consolidation and Integration

Posted on August 31, 2018 in Overviews |
By Henry Seltzer for ASTROGRAPH Horoscopes

The astrology of September is wild and wonderful, in many ways a continuation of the outer planet intensity of the summer months, with their retrogrades and eclipses. Of immediate relevance is the most recent solar eclipse in Leo, dating back to August 11th. At that time, the outer planet energies of Pluto and Neptune were highlighted by the eclipse degree itself, which was the focal point of a yod from these two powerful astrological archetypes, while Uranus in early Taurus, stationary in the sky as it turned retrograde, was closely aspected by Saturn, Neptune, and Chiron. With all three of these powerhouse outer planet archetypes so greatly emphasized, with a solar eclipse at the focus, four if you include the highlighted presence of limiting and restricting Saturn, these last few weeks have proven to be extremely tough sledding for we humans here below. It’s been tough to get things done, and an introspective and self-reflective mode has been standard fare with Mercury and Mars still in retrograde in the timing of this dynamic eclipse New Moon, continuing through the first full week of September. We are on the road to our eventual spiritual integration of necessary changes, and although this is never easy, it is very rewarding when we can simply relax and go with the flow that the universe is inclining us toward. What we are after is the satisfied feeling that we can still return to many years hence, saying “yes, I got that right.”

In this current month, while throttling down the intensity, these same considerations still apply. This can be judged by reflecting on the configuration of the September 9th New Moon that opens up the last three weeks of the month. Although not an eclipse, this second Sunday’s Virgo New Moon still partakes of the same outer planet dynamics that we have seen all year. The Sun and Moon directly oppose Neptune while closely aspecting Uranus and Pluto, bringing to a new stage to the transformational stew we all find ourselves in the midst of, while a stationing Saturn aspects Uranus even more closely. Though a trine alignment, the collision of these latter two antithetical archetypes – of limitation and freedom from all limits – is profound and fundamentally disturbing. This is true in our individual lives, and can also be observed as well of course in the collective, as the polarization of antithetical social forces even further intensifies. As individuals we face a painful balancing act between far-out but risky solutions versus firmly bounded practical considerations. Saturn, Uranus and Pluto, all three now in Earth signs, are advocating for a new sense of connection with the spiritual heart of the surrounding cosmos that is innovative but remains grounded in actual three-dimensional experience.

Neptune, too, is featured in the astrological currents of September, especially after the Virgo New Moon of September 9th that takes place at 17 plus degrees, and therefore in close opposition to Neptune’s position in Pisces. Neptune is in essence a spiritualizing factor, promoting compassion and a sense of oneness with all mankind, so that is the huge upside of his prominent presence for the current month. Similar to Pluto, however, this numinous influence insists upon necessary changes in behavior before he can be fully realized, and change does not come easily. Also, the Neptunian other-dimensional archetype is not at all at home in the physical plane, so that with a powerful Neptune promoting idealism there is also the danger of illusion, confusion, and self-deception, or the possibility of suffering from deception by others. Neptune also rules the substance oil, meaning that fossil fuel issues could also become better understood in coming weeks.

The other major astrological combination that is very much worth mentioning in the September timeframe is Saturn-Chiron, since these planets remain in square alignment just as Saturn becomes even more prominent and is also stationing to direct motion on September 6th. This brings up the issue of authority wound, usually driven by early childhood trauma on the part of parental figures. The wound of misplaced or mistrusted authority is very much with us these days in the outer world of collective events, and this presence is likely to become stronger as the month unfolds. The counter within each of us is that we take strength from our own individual authority, on our own terms, thereby reparenting ourselves in a way that is rooted in a growing sense of self-worth and no longer depends upon the approval of others. We win when we can be in touch with our own most sincere values, and can celebrate and take an active stand for that in which we most deeply believe.