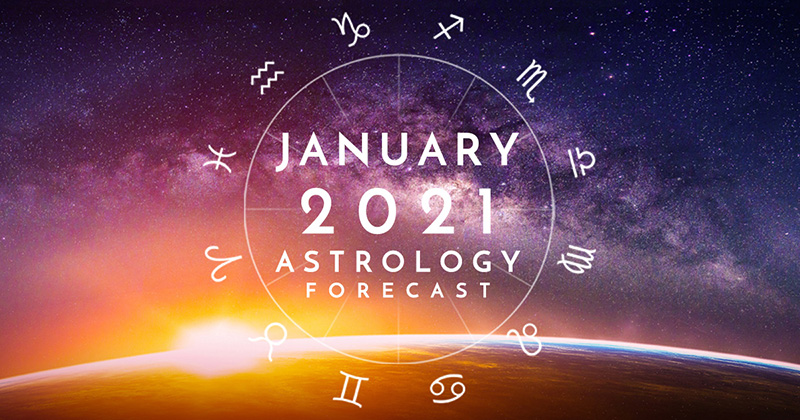 Posted on December 31, 2020 in Overviews |
By Henry Seltzer for ASTROGRAPH Horoscopes

This is another action-packed month, as the new 2021 year begins, and as we see light at the end of our Covid tunnel, so that perhaps by mid-year we could find ourselves escaping the worst restrictions of the ongoing pandemic. That the light will eventually come, as all indications are telling us now, is of course a great relief, but that this end of social distancing will not come sooner is of course a tough situation; Covid fatigue is real, and we are truly in the soup for another six months at least, maybe longer. In an accurate match to the discernible situation, we find that in this month’s astrology there is a tremendous focus on transformational Pluto, greatly emphasized in both the recent solar eclipse from mid-December, which still colors the first half of this new year, and in the month of January specifically. In the January 12th Capricorn New Moon, the Sun and Moon directly conjunct Pluto. When we analyze the remaining months of this first half year, in fact, this Pluto presence is still quite present, and in some way gets even stronger, indicating that we have a long way to go before we get out of our difficult situation.

The Capricorn presence of Pluto in such a powerful condition indicates that massive societal changes are still very much with us in this new year. This is true as well for our individual metamorphosis in coordination with the timing of our own personal evolution that we are in any case experiencing. It is of great interest to note also that there is a difference in our cosmic circumstances as represented by the fact that Saturn now resides in Aquarius, conjunct optimistic Jupiter and in square with progressive Uranus, rather than bundled up with Pluto in Capricorn. Although still somewhat active until the very end of 2021, the close Saturn-Pluto conjunction that was the intense hallmark of the 2020 year has now expired. That Pluto remains prominent in Saturn’s sign of Capricorn implies more of the same societal hardship and impulse for change will still plague us, although with a distinct shift in the astrological weather: thunderstorms but with occasional rays of sunlight.

There are several key moments in this whopper of a month, when Mars, Venus and Mercury all change signs, taking place from the 6th to the 8th, and when Mars and Venus align in a trine aspect from the 7th to the 10th, indicating heightened relationship attention, and most emphatically when the potent Capricorn New Moon arrives on the 12th, in conjunction with Pluto, as described above. When the Moon’s First Quarter hits, on the 20th, Mars meets Uranus in conjunction, indicating surprise actions and startling revelations especially for that particular day. Because Mars was in close conjunction with the new planet, Eris, in the timing of the winter solstice from the 21st of last month, we have an elevated Mars presence all this year. This could represent determined action in support of deep soul intention ( Eris) or, as well, other less positive manifestations such as buried anger exploding to the surface. We all could of course benefit from a better level of psychic integration along the way, as we can each come to that.

The two Full Moon events affecting the January month are both quite powerful as well. The December 29th Full Moon, immediately preceding the New Year, was in aspect to volatile Uranus, in Taurus, so that we have surprise events to contend with right from the very beginning of the month, as well as a great deal of intuition available to us as we go through its deep-seated changes. Then, near the end of January, on Thursday the 28th, there is a Full Moon in Leo that is also a T-square from Sun conjunct Jupiter in Aquarius, with the Moon opposed, to Mars in Taurus still widely conjunct Uranus. This final Full Moon is terrific for ideas, and for contesting them with others in our circle, and for impulsively forging ahead with what we decide from an emotional gut-level response that might detour around high-minded restraint. This is a powerful configuration that comes near the end of a potent month, and represents also the will of the individual put to use in a sharply determined manner within social contexts.

Finally, as we consider that a thoughtful and introspective time is beginning for us in this same end-of-month timing with the looming retrograde of Mercury, we must also recognize that there are many things to think about concerning our individual spiritual evolution and as well a massive transformation of society indicated by this thoughtful Covid reset in which we are still engaged. Mercury retrogrades through Aquarius for all of February and well into March, when you take the retrograde shadow into account.

What do we intend, heading into this New Year, and what can we concretely manage to achieve? The answer will varry according to the individual, but this we can say: the answer lies within our own hearts and how we can come to the most authentic version of ourselves that we can muster. Let us truly try, ignoring our doubts and any nay-saying that we encounter on the part of our social setting, to be the best that we can possibly be, letting go of anything that stands in our way. If we can solve our own dark places, we can serve as a beacon for the society that surrounds us to do the same. In this way we can truly come to the promise of our human heritage, to help this civilization to emerge from its shadows into the light of collective higher purpose.

It's been a very interesting, transformative year, and 2021 is sure to hold many more surprises and mysteries. Thankfully, the wisdom of astrology can help us all prepare for and navigate life with more grace and ease. See what's in store for you with a personalized astrological transit 2021 Forecast Report.