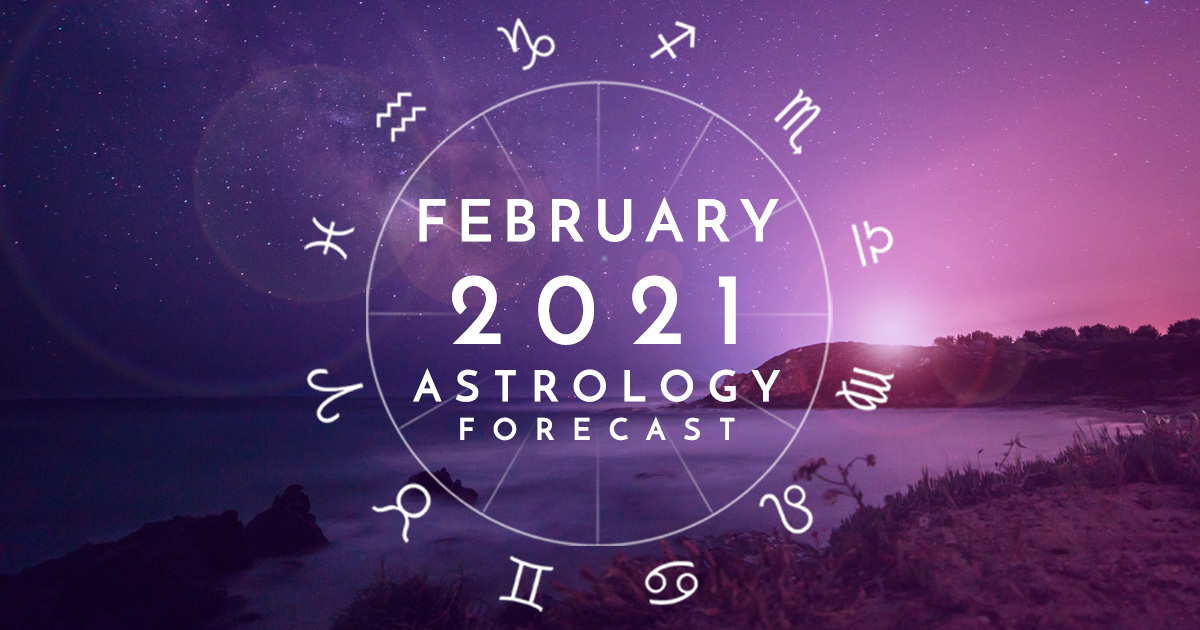 Posted on January 31, 2021 in Overviews |
By Henry Seltzer for ASTROGRAPH Horoscopes

It is a pretty wild month that February represents, given that the prominence of Pluto is ongoing. We had, all last year, the powerful presence of Saturn-Pluto in Capricorn, later of course joined by Jupiter as the 2020 year staggered to its close, and these outer planet energies in combination represented massive structural transformation, for our society, and for each of us as individuals. In this 2021 year, we still have a potent placement of Pluto to contend with, symbolizing much the same level of continued transformation, the astrological evidence for this prominence being the current aspects mage by the series of New Moon configurations that begin the year.

As an excellent example, the Capricorn New Moon of January 12th, that kicked off the lunation cycle for the last twenty days of that month, and the first ten days of February, was almost precisely conjunct Pluto in the sky. Similarly, the Aquarius New Moon of February 11th also features a powerful Pluto placement. This indicates to me that the trials of 2020 are not yet over, as a glance at the headlines will confirm.

This current month also features Mars-Uranus, Jupiter-Uranus, and Saturn-Uranus, which brings a degree of optimism and fresh conceptualizations into the picture, especially considering that the Leo Full Moon, from just before the month of February began, featured a Sun-Jupiter partile or same-degree conunction at 9 + degrees of Aquarius. This Full Moon also aspected Mars and Uranus in relatively close connection, with a midpoint of 8 degrees and 45 minutes Taurus. Jupiter with Uranus brings a plethora of bright ideas to the fore, while the competing aspect of Saturn-Uranus, prominent mid-month and then again later in the spring and winter, brings a collision between conservative initiatives and progressive ones. This particular outer planet combination, the featured astrological theme of the 2021 year, can also be read as the divide between right-wing and left-wing politics, as we see currently in many Western countries including this one.

The Aquarius New Moon of February 11th that has a close aspect of Saturn-Uranus in square, also aspects Pluto, and presents a forming T-square from Eris opposed to Haumea which gets stronger over the upcoming spring and summer. The indications are that standing up for oneself ( Eris) and doing this within the guidance of right action and right relationship, and with respect for Nature ( Haumea) will continue to be a vital component of our evolving 2021 society. This also indicates that the transformational impact and current prominence of Pluto, Lord of the Underworld and of death and rebirth, is not going away any time very soon this year. What is required is that we continue to find the courage to discover what we need to change, and to start letting go of those parts of us that get in the way. This New Moon also features Venus in partile conjunction with Jupiter, indicating optimism and forward vision, and the potential for relationship expansiveness.

In discussing new planets, we have also to consider the position of Makemake, whose symbolism supports greater attention paid to Earth activism, along with the profound connection to Nature that is the hallmark of both Haumea and Makemake. It is interesting to note that the Full Moon of February 27th, as well as the Leo Full Moon of last January 28th, included a strong dose of Makemake. Uranus and Chiron are in close aspect to Makemake, as well as the aspects supplied by Sun and Moon, only one degree off from exact. The previous Full Moon from late January was indeed accompanied by initiatives from the new Biden administration that were announced one day earlier. That was considered perhaps the most important day ever for climate change actions by any government. It will be quite interesting to see what comes up in this regard a month further on, at the end of February.