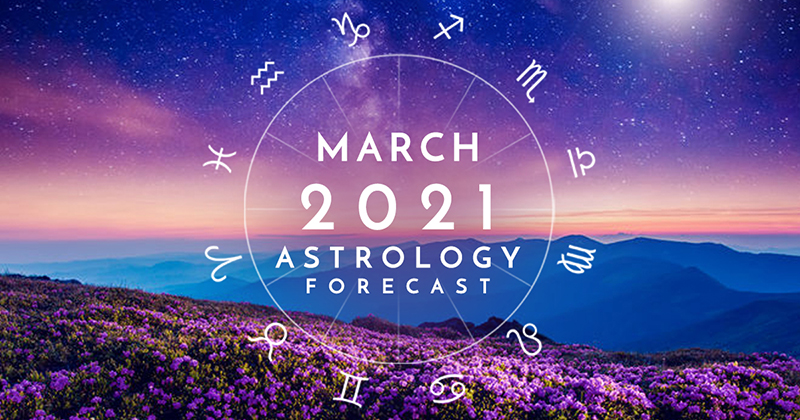 A March Month of Mysticism, Madness and Grace

Posted on March 1, 2021 in Overviews |
By Henry Seltzer for ASTROGRAPH Horoscopes

This March month is an exciting and a volatile time, and one when Uranus square Saturn really gets going, kicked off by the close alignment between them that was highlighted in the recent Virgo Full Moon from the end of February. This aspect, or World Transit in the terminology of seminal astrologist and historian Richard Tarnas, refers to the square between Uranus in the early to mid degrees of Taurus to Saturn in Aquarius, and bespeaks the strong urge to meld progressive innovation with concrete realization, two factors that remain in uneasy balance or else open conflict. It will be the dominant aspect of this 2021 year. Uranus wants to swing for the fences, avoiding all traces of the existing structures, while Saturn is about defending these current boundaries and modes of operating, imposing cautious limitations that might prove equally important. This conflict of antithetical archetypes is of course reflected in the zeitgeist by the prevailing war between conservative forces and an optimistic and forward facing progressive agenda that is in part spurred on by the existential threat of climate change. As we attempt to resolve the divisions in our society, we are also vitally concerned with healing the divisions within ourselves.

It is not that the presence of Pluto is now absent; transformation is still in the air in massive ways, including the ongoing evolution of our civilization. There still remains a powerful presence of Pluto in Capricorn, squared by Eris, and by a forming position of the new Nature planet, Haumea, that grows ever stronger over the next few months leading to a volatile summer. This structural transition is however now augmented by the ray of hope represented by prominent Uranus, and by Jupiter in Aquarius, where Saturn also currently resides. So we have culturally the need for change, and the dawning recognition of the possibility of change, along with entrenched reactionary resistance to any alterations in the fabric of the existing status quo.

The above facile summary is of course only part of the story.  Deep within each of us is every actor that we encounter as we make our way through the ups and downs of our strained social context, and we war within ourselves quite as much as any fight that plays out on national telly. There are urges within us to go boldly ahead in novel directions, and cautious voices holding us back, and we need to exercise ultimate discernment to choose wisely between them at each new moment and in every situation that we encounter.

The other major factor in this month's astrology is represented by Neptune and Venus, prominent together in conjunction with the March 13th Pisces New Moon. This is a quite lovely and also very potent configuration, conveying the transformative power of the relationship visioning provided by numinous Neptune, representing planes beyond the physical, and the overwhelming truth of our oceanic connection with each other at subliminal levels.  Venus is also highlighted in the recent mid-February New Moon, the Pisces New Moon which is conjunct Neptune and Venus, and on the 21st of March, following the spring equinox, when conjoined with the Sun for the final ten days of the month.

At the Libra Full Moon of March 28th , as well, another quite potent configuration emerges, featuring a partile or same-sign triple conjunction of Sun and Venus, and Chiron sandwiched between, directly opposite the 8-degree Libra Moon and in aspect to Mars, Saturn, Uranus, and the new activist Nature planet, Makemake, oriented toward attempting to solve Earth issues such as Climate Change. There could be great and healing attention paid to conflicts involving dark and hurting places within us, the residue of early childhood wounding, and a great deal of attention focused toward resolving them. Macro imitates micro, and it is also possible that new excitement on this existential front of the survival of the Earth’s climate might be forthcoming in the timing of this last weekend of the month.