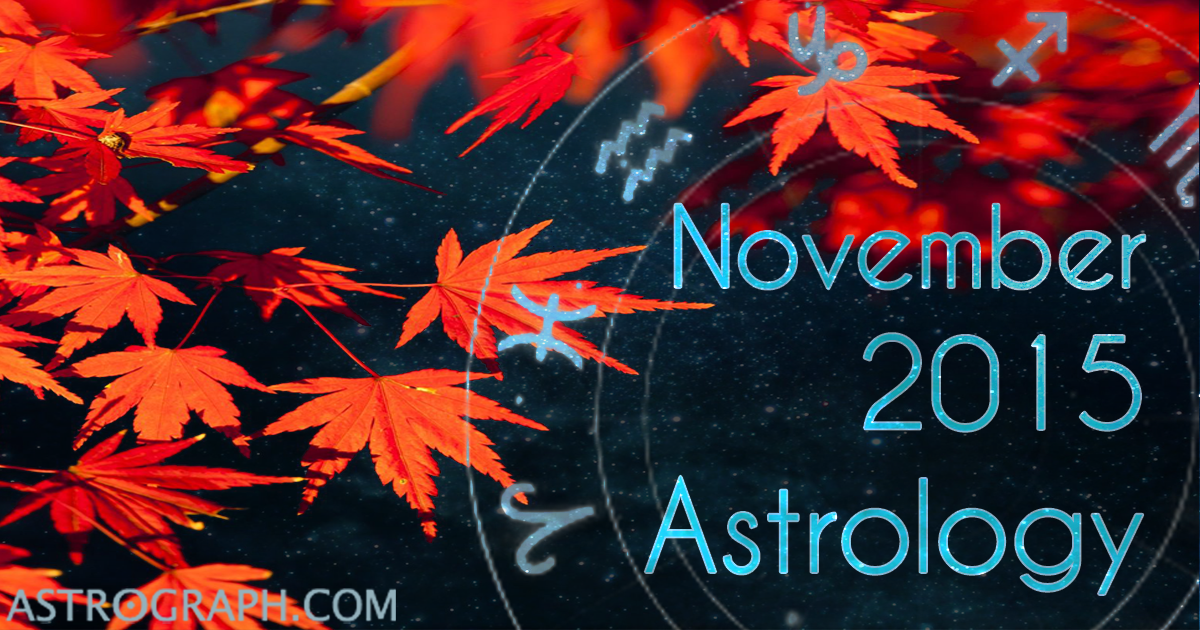 Posted on November 1, 2015 in Overviews |
By Henry Seltzer for ASTROGRAPH Horoscopes

The astrology of November features Mars, Chiron, Saturn, Uranus, Pluto, and Eris. The astrological symbolism for the first part of the month harkens back to the mid-October New Moon that began the lunation cycle that is still active over the first ten days of November. That Libra New Moon featured a strong presence of Uranus, as well as Pluto, Mars, and Saturn, as indicated by the Sun and Moon in opposition to Uranus, the conjunction of Mars and Jupiter in a close trine with Pluto in mid-Capricorn, and the highlighted presence of Saturn, aspected by Mercury, Venus and the New Moon. The implication is that while surprising results have become the norm, with the potential for anger to surface, due to the active Mars-Pluto connection, there have also been ameliorating factors such as the strong presence of Saturn, symbolizing a contrasting manner of studied and measured action.

Saturn is greatly featured all this month, having recently crossed into Sagittarius, abandoning the depth orientation of Scorpio in favor of the wild open spaces represented by this freedom-loving Fire sign. This is a time when Saturn's powers of contraction and limitation seem somehow less darkly and pessimistically restrictive, being rather more generously inclined toward mentoring and the learning of important life lessons.

The astrological archetype of Uranus, emblematic of trickster surprises and sudden enlightenment, is also strongly featured throughout November, because at the timing of the November 11th New Moon standing in inconjunct (or quincunx) aspect to Jupiter, and to the Sun and Moon, forming a yod. There are likely to be many surprising twists and turns of circumstances that may lead to unexpected wisdom. Uranus is also aspected by Jupiter and Venus as the month gets underway. The contrasting energies of Saturn and Uranus, strong in this month's astrology, create a push-pull thrust for studied action in favor of necessary change. We have the simultaneous desire to adhere to existing life patterns (Saturn) no matter what, together with the concept of abandoning these as proves necessary, on the basis of deep intuition that brings stunning awareness (Uranus) of an enlightened position on the needfulness of radical transformation to the basic structures of our lives.

Chiron, the Wounded Healer, is located in the same degree of Pisces that Uranus occupies in Aries, and is thus also powerfully highlighted in these late fall skies. Venus and Mars were exactly opposed to Chiron at the timing of the October 27th Full Moon, just a few days before the beginning of the month, while the Scorpio New Moon of mid-November continues the strong presence of Chiron by trine, his position in mid-Pisces, and by an extremely close opposition from Jupiter. There could therefore be undercurrents of activity below the surface layers of our psyches that have to do with buried places within us, the residue of early trauma that remains unresolved. We win when we pay the closest possible attention to everything that happens to us now, especially in terms of interpersonal connection, both within and below the surface layers of our personalities. By becoming more conscious of our early wounding, and accepting ourselves in this way, we have the capacity now to move beyond previous painful circumstances, and to heal in these dark places within us

The new planetary archetype of Eris is similarly triggered at the timing of this month's New Moon, and also the Full Moon of November 25th, another extremely powerful lunation. Eris represents a Feminine Warrior energy in support of deep soul intention. Her highlighted presence toward the end of November and on into next year, particularly over the summer, about six months away, acts as a powerful stimulus for standing up for what we most profoundly believe, vitally necessary in these times of individual and cultural metamorphosis.

Heading into the ending of a climactic 2015, Pluto and Uranus are drawing nearer to being once more in perfect square with each other, just as they were at the beginning of the year. We still therefore remain in the transformational stew that is the hallmark of this extremely potent decade. We are changing, at times slowly and at times by means of the rapidity of sudden epiphany concerning our situation, as indicated by the powerful positioning of Uranus during this turning of the year. We are enjoined by the cosmos to do our best to stand and deliver, coming always closer to embodying the deep soul purpose that we hold inside ourselves, as we can manage to discern it.

☆ Are you interested in utilizing the power of astrology to gain insight into your most cherished relationships? ☆