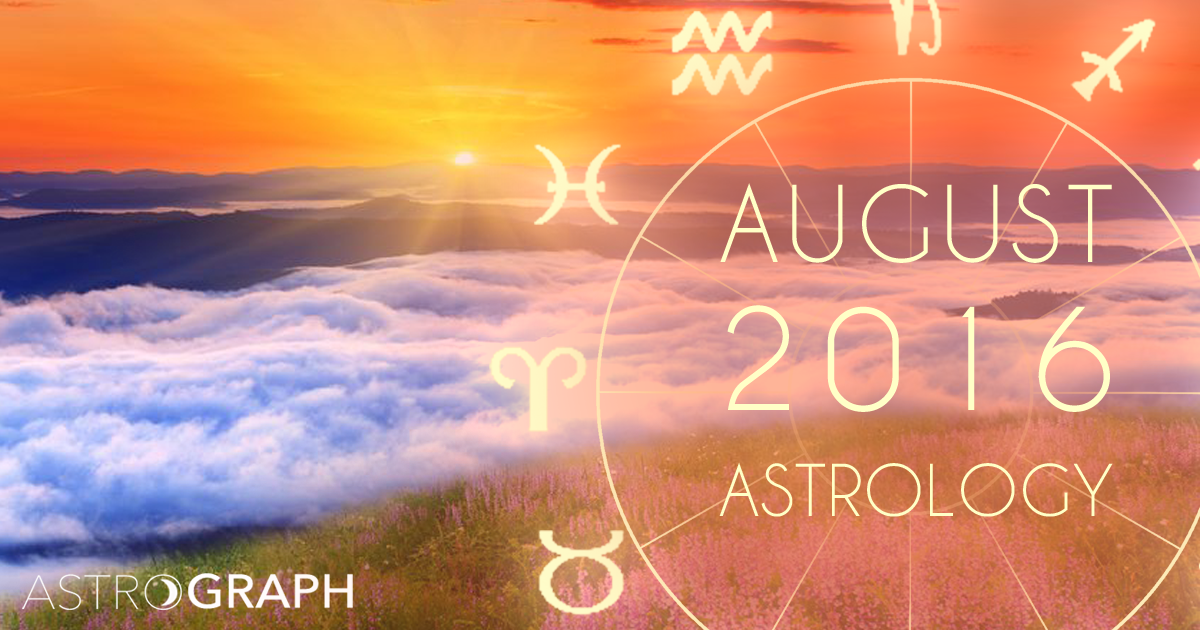 The Astrology of August – Compassion Versus Restriction

Posted on July 27, 2016 in Overviews |
By Henry Seltzer for ASTROGRAPH Horoscopes

The astrology of August features Saturn, Uranus, Neptune, Pluto, and Eris. It is also the case that Mercury is getting ready to turn retrograde by the end of the month, in the last degree of Virgo, although that will more poignantly affect the astrology of September. Mercury stays in Virgo for over eight weeks in all, in retrograde, or recovering from its backward motion, for the entire month of September, indicating that that month will be one of reviewing, re-analyzing, and re-thinking whatever has come before this timing. In the current month, Saturn and Neptune are still in tight square with each other, and beginning once again to get closer to the perfection of their aspect. Their antithetical energies are thus in collision, made even more powerful by Saturn coming to a standstill as he stations to direct motion in the mid-August timeframe. Uranus and Pluto will begin moving toward each other also, with a difference of about nine degrees this month shrinking to less than one degree from exact by the end of the January 2017. They remain in an orb of significant influence throughout the current decade right up to the year 2020.

As far as Saturn-Neptune, which is strongest during these seasons of summer and early fall, this important combination will not entirely fade away until next year, in the summer of 2017. Especially over the remainder of the current summer, we will see many manifestations of the conflict between idealism and practicality, with contrasts of illusion versus fact, spiritual truth versus prejudice masquerading as 'truth,' and deception versus the unmasking of deception. We are seeing these issues play out in our own individual lives, and also every day in the headlines. This applies to how we decide what to make of the larger issues of our time, attempting to sort through every variety of spin as supplied by pundits of differing stripes, in particular during this penultimate chapter of a fraught and unpredictable American election season.

Uranus having stationed retrograde just before the beginning of August, is now getting closer once again to the new planet, Eris. Their forming conjunction, less than a degree apart from exact, means that these two planetary energies are once more primed to make headlines along the lines of individuality, startling occurrences, and profound desire. Eris represents a spiritual warrior residing in each of us, which can be disruptive until we get in touch with our true soul-level intention. This comes from deep inside, and is stimulated by the configurations of August, most notably by the timing of the Full Moon of Thursday, August 18th, when Mercury and Jupiter in conjunction aspect Eris and Uranus. When you recognize that which is your true mission in life, that only you can adequately define, and perform, you will find the doorway to a sense of purpose that engenders happiness. As remarkable Jungian scholar of comparative mythology Joseph Campbell has it, you will be empowered to "follow your bliss."

Another very interesting configuration arises at this Full Moon, when the Sun at 25 degrees of Leo opposes the Moon in the same degree of Aquarius, and Mercury and Jupiter combine at 23 and 25 degrees of Virgo, as described above, in aspect to Uranus- Eris and opposite Chiron, the Wounded Healer, at 24 Pisces. Chiron describes our connection to inner wounding, and is prominent all month long, becoming especially so in this mid-month timeframe. Because Uranus and Eris occupy almost the same degrees of Aries as Chiron in Pisces and Mercury and Jupiter in Virgo, there is an intense stew of outer planet archetypal meaning that is implied. The Full Moon indicates culmination, and it is more than possible at this time that many factors of inner exploration will come to a new stage of recognition and conscious awareness, the prelude to soul growth.

A big month of Saturn is made even more so by the collision of Mars with a stationary direct Saturn, taking place between the Full Moon of August 18th and the Last Quarter Moon a week later. This is also the timing of the triple conjunction between Venus, Mercury and Jupiter in late Virgo, as Mercury slows down in the sky, preparing to retrograde. When, finally, Mercury retrogrades on the 30th, it is in close conjunction with Jupiter, and in opposition to Chiron. The second half of August is therefore quite a potent time for commitment to path, including deep introspection and the recognition of factors of internal wounding that inadvertently hold us back from being all that we can be, the exercise of our true humanity

What do the stars have to say about your most important relationships? ✧ ON SALE NOW ✧